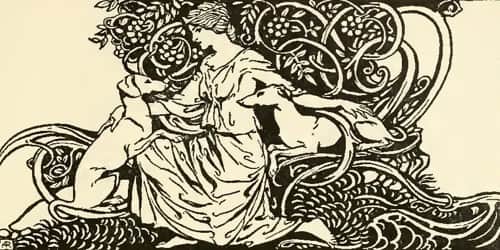 The Lazy Princess (A Tale From Ireland)

Once a poor woman had a beautiful daughter, but the girl was as lazy as the day is long. Her mother wished her daughter would learn to work, but no matter how she scolded, the girl dawdled away every day.

One morning, as the lazy girl sat about doing nothing, the old woman began once more to pester her to work. Just then the king’s son happened to ride past.

“Good woman,” called the prince, “your daughter must be very bad to make you scold so long and loudly.”

The poor woman was stunned. She bowed to the prince. “Oh no, sir. I was just begging my daughter to stop working so hard. She spins three bags of flax in one day, and the next day she weaves it into cloth, and by the third day, she has sewn 10 shirts or more. I worry that she works too hard.”

“She sounds like just the girl I want to marry,” said the prince, for he had long hoped to find a wife who could spin and weave and sew, and he was dazzled by the girl’s beauty. “Dress your daughter in her cloak, and we’ll ride to the palace. I’ll marry her if my mother agrees.”

Well, this worried the old woman, but before she could say a word, the girl was on the horse behind the prince, and away they rode.

When the queen saw the young lady, she smiled, and when the prince told of her marvelous skills, the queen handed her three pounds of flax. “This shall be spun by teatime tomorrow,” said the queen, and with that she said goodnight.

The girl wept as she sat with her flax and spinning wheel, wishing she had listened to her mother’s advice. Each time she tried to thread the wheel, the thread broke, and she was back at the beginning, and so she wept some more.

Suddenly a tiny woman with enormous feet appeared. “Never you mind,” said the woman. “If you’ll invite Old Woman Bigfoot to your wedding, I’ll spin your flax while you sleep.”

“Of course,” the girl cried happily, and sure enough, next day at teatime, the queen was amazed to see so much thread. It was finer than any she had ever seen. “Dear child,” said the queen, “it’s lovely. Tonight you shall do the weaving.”

Naturally that night the poor girl wept, for she did not know how to work a loom or even how to hold a shuttle. Suddenly an old woman with huge shoulders and hips appeared, and she offered to weave the thread if she too could attend the wedding. Naturally, the lazy girl agreed.

The queen was delighted when at the next day’s teatime she saw a cloth woven as fine as any she had ever felt. “Now rest,” said the queen, “and tonight you shall sew my son’s shirts. After that, we shall celebrate your wedding.”

The poor girl sat that night with scissors and needle and thread, but she knew nothing about sewing, and so she wept again. Suddenly a little woman with a gigantic red nose appeared. She offered to sew the shirts in exchange for an invitation to the wedding.

Well, you’ve never seen such fine shirts as those that lay upon the table when the queen came the next day at teatime.

Now people talked of nothing but the wedding, and oh, it was grand. The poor mother came, and the queen praised the lazy girl’s talents, and she talked about how happy she would be after the honeymoon.

“My daughter-in-law and I will sit together every day, spinning and weaving and sewing,” said the queen.

The prince, dreaming of riding and swimming and dawdling with his bride, frowned at that, and you can imagine how the bride felt when she heard the queen’s plans.

Just then, the woman with the big feet entered. “Dear me,” said the queen, “why are your feet so enormous?”

“Ah,” sighed the woman, “my feet have grown because I’ve spent my whole life standing at the spinning wheel.”

Before the queen could say another word, in walked the second old woman. “Ma’am,” asked the queen, “why are you so wide between your head and your feet?”

“This I owe to sitting all my life at the loom,” mourned the second old woman.

When the third woman appeared, the queen asked, “Tell me, please, why is your nose so big and red?”

“Ah,” sighed the woman, “I’ve spent my life bent over my sewing, and the blood of my whole body has seeped into my nose.”

The prince stood and put his arms around his wife. “My dear,” he said, “if ever I catch you spinning or weaving or sewing, I’ll pull the needle, the thread, the flax and the loom from your hands.”

The queen had to agree.