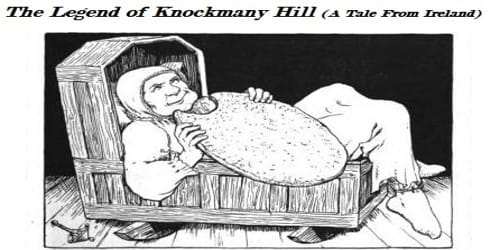 The Legend of Knockmany Hill

The Legend of Knockmany Hill (A Tale From Ireland)

Long ago, the famous giant Finn McCool and his gigantic relatives were working at the Giant’s Causeway when suddenly Finn looked at the others and said, “I’m heading home to visit my wife, Oonagh.” He pulled up a fir tree, lopped off its roots and branches, and using this as a walking stick, Finn set off for home on Knockmany Hill.

Another giant whose name was Culhullin was searching for Finn. People said no one had a chance against Culhullin in a fight, not even Finn McCool. Some say that Culhullin’s fist flattened a thunderbolt and turned it right into a pancake, and when he stamped his feet, the whole country shook. Culhullin had sworn he was going to fight Finn McCool.

Now Finn wasn’t fond of fighting, and he had been avoiding Culhullin. When he had heard Culhullin was on his way toward the Causeway, he naturally enough had decided to leave.

Back on Knockmany Hill, Finn and Oonagh spent two or three happy days together, but poor Finn couldn’t stop thinking about Culhullin. Finally, Oonagh asked him when the mighty Culhullin would come. Finn stuck his thumb into his mouth, which was what he always did when he wanted to know the future.

Finn was happy to hear this. He knew his Oonagh was close to the fairies, and to tell the truth, he thought she might be a kindhearted fairy herself.

Now Oonagh took nine woolen threads of different colors, which she always did to find out the best way to do anything. She plaited them into three braids with three colors each, putting one on her right arm, one closes her heart and the third round her right ankle. When she had done that, she knew just what to do, sure as could be.

Oonagh went outside to the top of the hill and put her finger in her mouth and blew three whistles. From Cullamore, the mountain that faces Knockmany, Culhullin heard her whistle. He knew that meant he was invited to Knockmany Hill, for this was the sign the Irish once gave to let strangers and travelers know they were welcome.

Finn began to quake. “What chance do I have?” he asked, “brave as I am, against a man who can walk the country into earthquakes and turn thunderbolts into pancakes?”

“Be easy, Finn,” Oonagh said, and she whispered her plan. “Speaking of pancakes, we’ll give Culhullin something to eat.”

She sent round to the neighbors for 21 iron griddles and hid them in 21 big loaves of bread. She baked these on the fire in the usual way, and stirred up a new pot of milk and made this into curds. Then she gave Finn his instructions.

That night they slept in peace.

The next day, just at 2 o’clock, they heard Culhullin coming. The mountain shook. “Into your cradle now,” Oonagh said to Finn, and he, disguised as a child, jumped into the cradle just as Culhullin knocked at the door.

“Is this where the great Finn McCool lives?” he asked.

“Sure he does,” Oonagh said, and they chatted a while.

“Well, Finn makes a paste of anyone who meets him. But since you’re here, would you do me a favor Finn would do if he were home? Will you be good enough to turn around the house? The wind is at the door.”

Culhullin went outside and put his arms around the house and turned it around completely. “And now,” Oonagh said, “since you’re so kind and Finn isn’t here to do this, would you go to the hill down below and pull the rocks aside? Finn meant to do it before he left, for we need some water from below.”

She led him to the place that was one solid rock. Culhullin stooped down and tore a cleft of about 400 feet deep and a mile wide, and that cleft is right there to this day.

“Now come in to refresh yourself,” she said, and she brought him a dozen of the loaves she’d baked. Culhullin bit into one of them, and crack! He broke three teeth.

“What’s this?” he demanded.

“That’s the only bread Finn eats,” she said, “but since it seems too hard for you, I’ll give it to the child.” Now she took a loaf that had no griddle inside and gave it to poor Finn, who lay in the cradle.

Finn ate the loaf right down.

Culhullin was shocked. “How did you become so strong?” he asked.

“I’m just like my father, and I’ll show you,” Finn said, in a childish voice. “Can you squeeze water from a stone? Mother, give us each a stone.”

Oonagh put a stone in Culhullin’s hand. He squeezed the stone, but no water came out. She gave another stone to Finn, but this one was really one of Oonagh’s cheese curds. When he squeezed, the whey dripped out clear as water.

When Culhullin saw that, he hurried to say goodbye to Oonagh and to assure her that he wouldn’t wait for Finn any longer. “I’ll never fight that man,” he said.

And in the cradle, Finn smiled because he knew the threat of Culhullin was gone forever, thanks not to his strength but to Oonagh’s wit and wisdom.