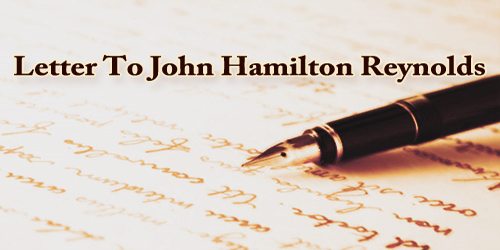 Ever since I wrote to my Brothers from Southhampton I have been in a taking, and at this moment I am about to become settled, for I have unpacked my books, put them into a snug corner pinned up Haydon Mary Queen Scotts, and Milton with his daughters in a row. In the passage I found a head of Shakspeare which I had not before seen. It is most likely the same that George spoke so well of; for I like it extremely. Well his head I have hung over my Books, just above the three in a row, having first discarded a french Ambassador now this alone is a good morning’s work.

Yesterday I went to Shanklin, which occasioned a great debate in my Mind whether I should live there or at Carisbrooke. Shanklin is a most beautiful place sloping wood and meadow ground reaches round the Chine, which is a cleft between the Cliffs of the depth of nearly 300 feet at least. This cleft is filled with trees & bushes in the narrow parts; and as it widens bedomes bare, if it were not for primroses on one side, which spread to the very verge of the Sea, and some fishermen’s huts on the other, perched midway in the Ballustrades of beautiful green Hedges along their steps down to the sands. But the sea, Jack, the sea the little waterfall then the white cliff then St. Catherin’s Hill “the sheep in the meadows, the cows in the corn.” Then, why are you at Carisbrooke? say you Because, in the first place, I should be at twice the Expense, and three times the inconvenience next that from here I can see your continent from a little hill close by, the whole north Angle of the Isle of Wight, with the water between us. In the 3rd place, I see Carisbrooke Castle from my window, and have found several delightful wood-alleys, and copses, and quick freshes. As for Primroses the Island ought to be called Primrose Island: that is, if the nation of Cowslips agree thereto, of which there are diverse Clans just beginning to lift up their heads and if an how the Rain holds whereby that is Birds eyes abate Another reason of my fixing is that I am more in reach of the places around me I intend to walk over the Island east West North South I have not seen many specimens of Ruins I dont think however I shall ever see one to surpass Carisbrooke Castle. The trench is o’ergrown with the smoothest turf, and the Walls with ivy The Keep within side is one Bower of ivy a Colony of Jackdaws have been there many years. I dare say I have seen many a descendant of some old cawer who peeped through the Bars at Charles the first, when he was there in Confinement. On the road from Cowes to Newport I saw some extensive Barracks which disgusted me extremely with Government for placing such a Nest of Debauchery in so beautiful a place I asked a man on the coach about this and he said that the people had been spoiled In the room where I slept at Newport I found this on the Window “O Isle spoilt by the Milatary!” I must in honesty however confess that I did not feel very sorry at the idea of the Women being a little profligate The wind is in a sulky fit, and I feel that it would be no bad thing to be the favorite of some Fairy, who would give one the power of seeing how our Friends got on, at a Distance I should like, of all Loves, a sketch of you and Tom and George in ink which Haydon will do if you tell him how I want them From want of regular rest, I have been rather narvus and the passage in Lear “Do you not hear the sea?” has maunted me intensely.

It keeps eternal Whisperings around Desolate shores, and with its mighty swell Glut twice ten thousand Caverns; till the spell Of Hecate leaves them theif old shadowy sound. Often ’tis in such gentle temper found That scarcely will the very smallest shell Be moved for days from whence it sometime fell When last the winds of Heaven were unbound. O ye who have your eyeballs vext and tir’d Feast them upon the wideness of the Sea Or fed too much with cloying melody Sit ye near some old Cavern’s Mouth and brood Until ye start as if the Sea Nymphs quired April 18th

Will you have the goodness to do this? Borrow a Botanical Dictionary turn to the words Laurel and Prunus show the explanations to your sisters and Mrs. Dilke and without more ado let them send me the Cups Basket and Books they trifled and put off and off while I was in Town ask them what they can say for themselves ask Mrs. Dilke wherefore she does so distress me Let me know how Jane has her health the Weather is unfavorable for her. Tell George and Tom to write. I’ll tell you what on the 23rd was Shakespeare born now if I should receive a letter from you and another from my Brothers on that day it would be a parlous good thing. Whenever you write say a word or two on some Passage in Shakespeare that may have come rather new to you, which must be continually happening, not withstanding that we read the same Play forty times for instance, the following from the Tempest never struck me so forcibly as at present,

Shall, for the vast of night that they may work, All exercise on thee

How can I help bringing to your mind the line

‘In the dark backward and abysm of time’

I find I cannot exist without Poetry without eternal Poetry half the day will not do the whole of it I began with a little, but habit has made me a Leviathan. I had become all in a Tremble from not having written anything of late the Sonnet overleaf did me good. I slept the better last night for it this Morning, however, I am nearly as bad again. Just now I opened Spenser, and the first Lines I saw were these

‘The noble heart that harbors virtuous thought, And is with child of glorious great intent, Can never rest until it forth have brought The eternal brood of glory excellent’