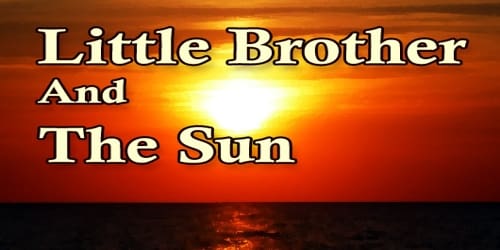 Little Brother And The Sun

At the beginning of time, when the Earth was brand-new, the animals were chiefs, larger and far more powerful than were human beings. They looked different from the way they look now, and they might have grown even larger and become even more powerful if not for one little boy.

This little boy lived with his sister in the middle of the forest. One day, while his sister was out searching for grubs to eat, the little boy shot a bird with his bow and arrow. This was an astonishing feat, for the birds in the forest were huge and quite strong, and the little boy was tiny and powerless. But he did have a powerful will.

When the boy’s sister saw the dead bird, she was amazed. “That’s impossible,” she said, but the little boy knew it was not. The next day he shot another bird, and on the third day, he shot yet another. Before long he had collected enough feathers to make a beautiful feather robe.

The little boy loved his robe and wore it night and day. He decided one day to set off into the forest to show anyone he came upon how handsome he looked. He walked for a long time, but he met neither animals nor human beings, and he grew so tired that he decided to rest. He came to a place where the hot sun blazed down on the grass, and there he lay down. Soon he fell fast asleep.

While he slept, the sun rose higher and higher, shooting fiery rays upon the little boy. When he awoke, he discovered that his robe was sung from the sun’s strong rays. His beautiful robe was ruined, and he was furious. “I will get even with you,” he shouted to the sun. “You are not so high and mighty that you won’t be harmed by my fury. You’ll see. I’ll make you pay for this.”

The boy, shaking with anger, ran home to his sister. “You must make me a snare to trap the sun,” he said. “The sun has ruined my robe.” Then he lay down and refused to eat or drink. “I will not eat again until I have a snare for the sun,” he said.

His sister, distraught to see him so unhappy, went into the forest and began to gather things to make a snare. She gathered sinew, pieces of hair, long, thick sticks and other secret things. There she worked together until she had created a snare so strong that even the biggest animals could never escape its trap.

When the boy saw the snare, he was thrilled. He held it in his hands while he schemed. That night, at midnight, he walked into the forest and searched until he found the hole from which the sun rose each morning. At the entrance to the hole, he set his snare.

At dawn, when the sun began to rise from its hole, the snare caught it and held it fast. No matter how the sun struggled, it could not break free, and so on that day the sun did not rise, and the Earth remained dark. The animals, who thrived in the sun, grumbled and cursed and searched for their sun.

Finally, the animals discovered that the sun was trapped. “What shall we do?” they asked each other and decided to gather a council of elders to discuss the problem. The council decided that only one animal could help the sun. This was the mouse. In those days the mouse was enormous, with teeth like the sharpest knives. “You’ll gnaw through the snare,” the elders said. The mouse scurried at once to the place where the sun was attempting to rise.

The mouse approached with care, for the sun, in its fury, was blazing hot. The hair on the mouse’s back burned and the flames seared his eyes. Still, he knew he must save the Earth from darkness, and so he crawled closer and began to gnaw. He gnawed and chewed and tore at the snare. He worked unflinchingly while the angry sun tortured him with its rays. At long last, the snare broke in two.

The sun was free. It rose into the sky, and once again the Earth was warm and bright. The animals began to cheer. But now they saw the damage that the angry sun had done as the mouse had worked and as they had watched. The mouse had shrunk to the size of the tiny mice we know today, and all the other animals had shrunk, too, so they no longer were larger than human beings.

That was when the animals realized that, although the mouse had freed the sun, and although they were strong, no one was as clever as the little boy. He was the one with the greatest power, for he had snared the sun. Ever since that day, the animals have been in awe of the power of humans, and they have never again tried to be the chiefs of the world.