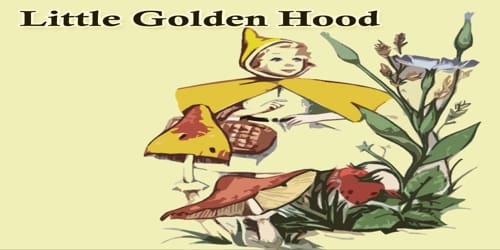 Once upon a time, a pretty little girl named Blanchette lived in a tiny village in France. People called Blanchette “Little Golden Hood” because she always wore a fiery red cloak with a shining golden hood.

Blanchette’s grandmother gave her the hood because it would bring her good luck. “I’ve made this hood from sunshine,” Grandmother said, and because most people thought her grandmother had magical powers, Blanchette decided to always wear the hood for protection.

One day Little Golden Hood’s mother handed her a cake to take to her grandmother’s house. “Spend some time with Grandmother,” said her mother, “and then come right back home. Whatever you do, don’t talk to any strangers in the woods. Do you understand?”

“Oh yes,” Blanchette said happily. Off she went, carrying a basket with the cake, proud and happy that her mother trusted her to do this errand.

Little Golden Hood’s grandmother lived in another village on the far side of the woods. Blanchette walked into the woods, passing beneath great trees when suddenly she heard a shuffling, gruffling sound from behind a bush. “Who’s there?” she called.

Wolf had seen Blanchette walking alone and had hoped to eat her, for he was very hungry, and she looked so soft and sweet and fresh. He had hidden, but alas, as she passed by, so did three woodcutters. He dared not attack her while others were in sight.

And so he stepped from behind the bush. “Hello, dear Little Golden Hood,” Wolf said, nodding politely at her.

“How do you know my name?” the girl asked.

“Everyone knows you,” said Wolf. “Now where are you going, pretty one, with that beautiful basket?”

“To my grandmother’s house,” said Blanchette.

“That’s close to where I’m headed,” said Wolf, “and no doubt I shall arrive first, for I have four legs, but you have only two. I’ll tell her you’re coming to see her.”

With that Wolf set off through the woods. When he reached Grandmother’s house, he knocked at the door, but no answer came. So he stood up on his hind legs and pushed with his forepaws on the latch. The door opened. Wolf looked around and saw that no one was home.

“Ah,” said Wolf, spying Grandmother’s empty bed and her nightcap upon a table. “I know just what I’ll do.” He shut the door, pulled Grandmother’s nightcap on his head and slipped into her nightgown. Then he lay down on the bed, pulling the covers up to his chin.

Soon Blanchette arrived, carrying her basket and a handful of daisies she had picked along the way. When she knocked, Wolf cried, “Ah dear, come in. Just push on the door. It will open.”

Blanchette did just as she was told. “Grandmother, your voice sounds funny,” she said. “Do you have a cold?”

Wolf coughed and sneezed. “I do,” he said. “But I’ll be fine. Put your basket down and sit down beside me, sweet girl.”

Little Blanchette did as she was asked, but she left her golden hood upon her head, for she loved it that much, and she never liked to remove it.

She sat on the bed beside Wolf. “How like Friend Wolf you look today, Granny,” she said, shivering slightly, for her grandmother looked very strange.

“And what hairy arms you have Granny,” Blanchette said.

“The better to hug you with, child,” said Wolf.

“What a big tongue you have, Grandmother,” Little Golden Hood said, gasping at the sight of the long, red tongue.

“All the better for speaking, my dearest,” said Wolf.

“And what enormous teeth you have,” the girl said, staring into the wide-open mouth.

“That’s for eating little children,” Wolf cried, and with that, he lunged at her, but Little Golden Hood lowered her head and began to scream, and Wolf caught only her golden hood between his teeth.

When he did, he reared back, howling. For, you see that golden hood was magical, and it tasted as hot as coals. Wolf’s tongue and teeth and mouth felt as if they were on fire. He jumped up and out of bed. He yelped in pain as he dashed to the door.

At that moment Grandmother returned from town. “Wait!” she cried when she saw Wolf at her door, and she opened her empty sack.

Wolf could not see. His eyes were filled with tears from the pain. And so, by mistake, he jumped right into Grandmother’s sack.

Now Grandmother closed the sack and ran outside and emptied it into the well. And Wolf, still howling and shrieking, was drowned.

Then Grandmother ran into the house and found her little grandchild trembling in bed.

“Well, well, so my golden hood saved you, child. And now you must drink some milk and eat some cake to restore your joy.”

After that, she took her granddaughter by the hand and walked her home.

Mother, of course, was furious when she heard what had happened. “I told you not to talk to anyone in the woods,” she scolded Blanchette. Blanchette promised she never would again.

She kept her promise. And when the weather is fine, you likely will see Little Golden Hood out in the fields, her golden hood glowing brightly in the sun, her cheeks blooming like springtime flowers.