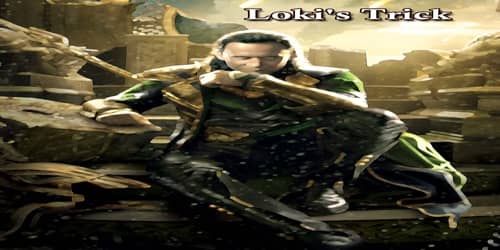 Long ago, the gods of the Norsemen lived in a place known as Asgard, which was far above the Earth. At the other end of that world, in an area always covered in ice and snow, lay the land of the giants, the enemies of the gods and the people.

One day, one of the giants decided to visit Earth. He wanted to cause trouble. He stopped at a cottage by the seashore, the home of a poor peasant. The giant knocked on the door, and when the peasant answered, the giant said, “How would you like to play a game of chess?”

Now, the peasant could not pass up this opportunity, for he loved nothing better than a game of chess, and he seldom had a partner to play with.

“Whoever wins,” the giant said, “will take from the other the possession he most loves.”

The peasant laughed and looked at his wife and son. “That sounds like a good bargain, don’t you think?” he asked them, and all three agreed. They could not think of a single treasure in their cottage, and so they believed they had nothing to lose.

And so the game began. All-day and through the night, the peasant and the giant played, for they were both skilled at the game. But just as the dawn light filtered through the windows of the cottage, the giant cried, “Checkmate! I win!” And then he grinned a wicked grin. “Now, give me your son,” he said, “for I know you treasure him above all else.”

The peasant was horrified. “No, please,” he begged, “take something else.”

The giant roared with laughter. “You should not make bargains you will not keep,” he said, “but I will let him stay with you one last night. If you can hide him from me, you can keep him.” He strode away, the earth trembling beneath his feet.

The peasant, in his terror, called upon Odin, king of all the gods, for help. Odin agreed to hide the boy. And so he changed the peasant’s son into a grain of wheat. This grain he hid in the peasant’s wheat field.

The next morning, the giant returned. Without a moment’s hesitation, he sniffed the air. Then he strode into the wheat field and began to cut it down. When at last he held a stalk, he picked off each grain until he held the grain that was the boy.

“Odin, please help,” the peasant and his wife cried, and Odin blew a puff of wind that snatched the grain from the giant’s fingers. The grain flew into the cottage and turned again into the boy. He bolted the door behind him and hid, trembling with fear.

The giant smiled at the peasant, who seemed relieved. “That was a good try,” the giant said, “but I will return tomorrow, and unless you do a better job of hiding him, I will have your son.”

The parents called next upon the god Honir, Odin’s brother. Honir appeared, thought a moment, and then turned the boy into a feather and hid him in the breast of a great white swan that swam on a nearby river.

At dawn, the giant returned and looked around. He sniffed the air, strode to the river and grabbed the swan from the water. Before the peasant could shriek, the giant killed the swan, plucked its feathers, and when he held the feather that was the boy, he smiled. “Ah-ha!” he roared, but just at that moment Honir blew a puff of wind and the feather flew into the cottage, where it changed into the boy. The boy again bolted the door.

“Haha,” the giant laughed, “one more try. Tomorrow, you shall have to do a better job of hiding your son, or he will be mine, I promise you. The gods are no match for a giant.”

The terrified parents called on Loki, the god of fire, the most cunning of all the gods. Loki changed the boy into a tiny fish egg and hid him among the eggs of a haddock that swam far from shore.

When the giant returned, he went at once to the shore and sniffed the air. He grinned and fetched a boat and rowed with tremendous strength out to sea.

Seeing the haddock, he snatched it and placed it in the boat and rowed back to shore. While the peasants anxiously watched, the giant sliced open the haddock lifted its eggs in his hand and found the one that was the boy.

“What is that?” Loki asked for he had appeared at the giant’s side.

“Only a haddock’s egg,” the giant said. “Nothing a god would want.”

“I don’t believe you,” Loki said. And the giant held out his hand. “Seeing believes,” he said.

Loki at once snatched the egg from the giant’s hand, and the egg turned back into the boy. “Run and hide,” Loki cried.

The boy ran to the cottage and bolted the door behind him, but this time the giant followed. “No simple bolt can stop a giant,” he laughed. He pulled the door open with just one tug. “Come to your new father,” he bellowed.

“He isn’t there,” Loki said slyly.

“Don’t lie to me!” the giant roared, and he stuck his head inside. But the giant had forgotten how small the cottage was. He thrust his head inside and struck a beam. He was instantly knocked unconscious.

Loki ran to the giant and stuck him through the heart with the giant’s own fishing knife.

Forever afterward the boy and his parents lived in peace, and the grateful parents praised Loki as the greatest god, for he had not abandoned them in their time of greatest need.