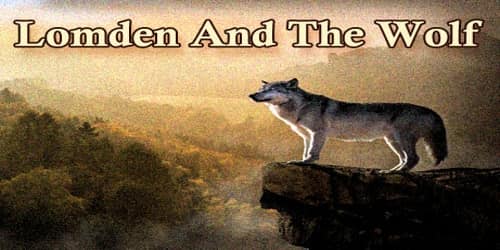 One afternoon, Memna the sheep was grazing in a mountain pasture along with the rest of the flock. Now, the other sheep were content to remain in the pasture under the eye of the shepherd, who had warned them not to stray. But Memna, who was young and adventurous, thought, “How boring it is to graze in the same meager pasture, day after day! The shepherd is a silly fellow who’s scared of every little thing; that’s why he keeps telling us not to venture out of this tiny space. How I wish I could go out and explore the terrain for myself! That valley on the east looks so green I’m sure the grass and leaves there will be much thicker and juicier than this dry grass!”

Presently she saw that the shepherd was dozing, and that the others in the flock had their attention elsewhere. All of a sudden, a daring thought struck her why not seize this opportunity to sneak away from the flock and explore that inviting valley? Surely she could graze there to her heart’s content and get back before she was missed!

Soon, the little sheep was treading the glorious path of freedom. Merrily, she frisked and bounded her way to the valley.

Alas, she had rejoiced too soon! For, all of a sudden, she was stopped in her tracks by the sight of a large, ferocious wolf who stood blocking her path! He eyed the plump sheep with delight and boomed, “Ah-ha, what have we here? A delicious dinner just what I’d been longing for!”

Poor Memna, who had never anticipated such a danger, was rooted to the spot. She was no terrified that she could not even bleat aloud! She stood there as if mesmerized, staring at the wolf with terrified eyes.

“Come, come, my dear, don’t look so stricken,” said the wolf. “There’s nothing to be sad about on the contrary, you should rejoice! You’re going to fulfill the purpose of your life, by providing a delicious meal to a poor, starving wolf!”

Moving menacingly towards her, he paused, as if struck by a new thought, and said, “On second thoughts, I don’t think I shall have my meal here, in the open. It’ll be much tastier if savoured at leisure, in the privacy of my cave! But then, my cave is far from here, and if I kill you know it’ll be quite a job to drag your plump body (here he paused to leer at Memna and lick his lips, as she shuddered in fright) all the way there! So I’ll lead you to the cave as my honored guest! Come on!”

Clutching poor Memna by the scruff of her neck, he began dragging her towards the mountain.

Suddenly, Memna saw a familiar figure grazing in a corner of the valley. It was Lomden, the clever here. Finding her tongue, she called out “Lomden, help me! The wolf is going to eat me!”

The wolf said, “Of course I am. Do you think that little here is so foolish as to try to protect you? Why, I can knock him dead with one swipe of my paw! The only reason I’ve chosen you instead of him for dinner is that you’re plumper and would make a tastier meal!”

Lomden wondered what he could do to Memna. The wolf was right he was much stronger than Lomden and would not hesitate to kill him if challenged. Suddenly, he had an idea.

Turning to the wolf, Lomden said, “How right you are! I would indeed be a fool if I tried to help the silly sheep who has been caught by one so powerful as you! And as I’m no fool, I shall help you instead.”

“Help me! How?” asked the wolf curiously.

Lomden said, “Before you go any further, let me just run down the valley to make sure that there are no hunters around who could deprive you of a good meal.”

The wolf said, “I never thought of that! Go on then, Lomden; I’ll wait for your return.”

The hare swiftly loped away into the bushes and soon vanished out of view. As he raced along, he kept his eyes open for anything that might come in useful.

Soon, he came to a spot where, evidently some hunters had recently camped. Assorted litter lay all round the remains of their camp-fire. Lomden stopped to rummage among the rubbish, and found a piece of paper and a strip of felt. “Ah! Just the thing I need!” he exclaimed happily as he picked them up.

Having made some arrangements, Lomden then ran back to where the wolf was waiting for him.

“Well?” asked the wolf impatiently on seeing him. “Did you spot any hunters?”

“Hunters? No,” answered Lomden, “but I did find something that might be of interest to you.” He showed him the paper, which had been rolled up and tied with the piece of felt. “It seems to be a message from the Imperial Palace! It bears the Emperor’s seal,” he declared.

“What does it say? Read it and tell me. You know I can’t read,” said the wolf.

Lomden reverentially opened the paper and pretended to read it. He said, “Oh, this is an order from the Emperor! Let me read it out to you.”

Loudly he declaimed the imaginary order, “I, the mighty emperor, hereby issue an order for a gown to be made from the fur of seventy-five wolves. I have been able to find only seventy-four wolf hides so far. I hereby command all inhabitants of my land to find one wolf at the earliest, and bring him to my palace, dead or alive. Anybody who fulfils my wish will be rewarded handsomely.”

The wolf turned pale on hearing this pronouncement. Lomden thoughtfully said, “Hmmm….a handsome reward! Besides, when the Emperor himself commands it, which can disobey?” He turned to look meaningfully at the wolf.

The wolf, now a far cry from his earlier fierce self, trembled in fear and pleaded, “Please, Lomden, don’t inform anyone of my whereabouts! Let me go and hide!” Releasing Memna, he took to his heels.

Lomden laughed heartily at the sight of fleeing wolf. Memna heaved a great sigh of relief and fervently said, “Thank you, Lomden!”

“It’s all right, Memna! Go back to your flock and don’t stay away in future. After all, I may not be there to rescue you the next time,” warned Lomden. A chastened Memna took his advice and returned to the flock, very much the wiser for her little adventure!

Moral of the story: ‘Quick wit solves many problems.’