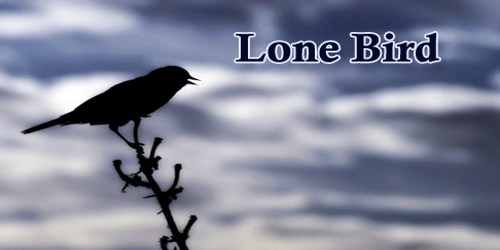 Once upon a time and long ago, on the shores of the Big Water, there lived a maiden known as Lone Bird. She lived with her mother and father, who were kind and good people. Like her parents, Lone Bird was a gentle girl. She was beautiful, too, and she was as graceful as the silver birches that grew near her home. Her voice was as sweet as the flutes her people played, and her smile was as bright as the spring sunshine. In every way, Lone Bird was a marvelous girl, and when she grew to be a young woman, many young men wished to marry her.

Her mother and father did not worry. They were certain that their daughter, like all the other girls in the village, would one day decide to wed. But as the years passed and Lone Bird took no interest in marriage, her father decided he must take some action.

And so Lone Bird’s father invited all the men from all the villages to come to a race. “Whoever wins the contest,” he announced, “will win my daughter’s hand in marriage.”

The day of the race arrived, and everyone from villages miles around came to watch. Mothers came to cheer on their sons in their quest to marry the beautiful Lone Bird. Fathers came to coach their sons to victory. Parents of other girls came to watch the many suitors, to select someone for their own daughters. And young girls came to see who they might wish to marry. Only one man could win. They would find from the others a suitable match.

The day was bright and warm. The sky was blue, and a light wind rose so that the silver birches sang in the wind and the scent of pine filled the air. The flute players gathered and played music. Everyone was ready. The suitors stood at their marks. The elders stood at the end of the track, waiting to judge.

Only one person was missing. Lone Bird did not appear. She stayed behind in her parents’ lodge, refusing to be part of this. “I will not marry anyone,” she said to her father and mother.

“She’ll come to her senses,” her father said, and he joined the others and gave the signal for the race to begin.

At the sound of the whistle, the men set off. They were a magnificent sight to behold with their strong limbs and their smiling faces and their passion. Each one believed he would be the winner. Each one hoped to marry Lone Bird.

Two men reached the finish line at the same time, and so Lone Bird’s father invited them to join a jumping contest. They stood ready, and both men leaped, and in this contest too, the men tied.

Lone Bird’s father did not know what to do. “The Great Spirit is watching over both of you,” he told the young men. “I must ask my daughter to choose her husband.” And so he sent for Lone Bird.

The two young men stood at attention before the beautiful maiden. “Daughter,” said Lone Bird’s father, “select from these two men the man you would marry.”

Lone Bird smiled at the men. She could see that they were good men, and she admired their strength and courage and skill. Still, she shook her head. “I am sorry, but I do not wish to marry anyone. Please forgive me, but I know I cannot marry.”

The young men were bitterly disappointed, and Lone Bird’s father was dismayed, but she spoke with such firmness, yet so gently, too, that they accepted her words as wisdom.

Now another year passed, and another. Each year the leaves fell in autumn, and winter brought brisk winds, and in the spring the snows melted and sunshine warmed the earth. And every year in spring, when the scent of pine and fir filled the air, Lone Bird remembered her father’s contest.

Lone Bird also noticed that her parents were growing older. She knew that the time for their journey to the spirits would not be long.

For the first time she felt loneliness when she thought of her future. She stood at the lake’s edge at twilight and noticed that the ducks and geese traveled in pairs, that the birds fluttered by in pairs, and so did the butterflies. The herons, which stood like one-legged statues before her, were a pair. It seemed to her that even flowers bloomed in pairs. Sadness filled her heart, and she began to wonder what she was supposed to do. Something in her heart had brought her to this place, to the edge of the lake in springtime.

Suddenly she looked up and noticed the moon. “How beautiful you are,” she said to the moon. “If only I could love you, I would never be lonely.”

Later that evening, when Lone Bird’s father returned to the lodge, he called to his daughter, but she did not answer. He began to look for her. He looked everywhere, in the hills and by the lake, in every lodge and in the forest. She was nowhere to be found. He and his wife did not know what to do, and so they called upon the Great Spirit to ask for advice.

The Great Spirit moved them to look up, and when they did, they saw the moon, and on its face, they saw their daughter’s smiling eyes, and they saw that she was resting in the arms of the moon.

Now they knew she was safe and loved.

Many moons have passed since that day, but still when the flowers bloom and the birds begin to build their nests and herons return to the lakeshore, people see the face of Lone Bird on the moon and feel that she is at peace.