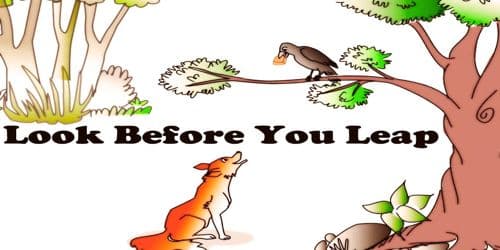 Look Before You Leap

Once a dog found a piece of bone. He was eating sitting under a tree. There sat a crow on the tree. It wished to take away the bone from the dog. Sitting on the branch, the crow was watching the dog trying to pierce the meat from the bone. He planned to fulfill his desire of getting the meat from the dog by adopting a trick. Then he came to the dog and tried to make friendship with him. But the dog got furious when he saw the crow near him. The crow tried to cajole him with sweet words. He told him that he should bring some salt from the nearby house to make the bone tasty. He assured him that he would remain vigilant until he came back. The dog could not believe him as the crow was not at all trustworthy.

Since the crow persisted in, finally the dog agreed to do this. Besides, he also wanted to make his food tastier. Then he decided to go keeping the bone under the supervision of the crow. As soon as the dog moved a few yards from the crow, the crow took the bone in his beak and flew away. To his utter surprise, the slog saw the crow flying far away with his favorite bone. The dog realized that he had befooled himself by the sweet words of the crow yourself by the sweet words of the wicked.