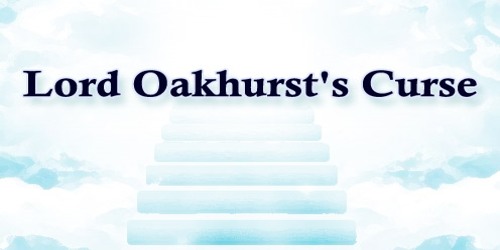 Lord Oakhurst lay dying in the oak chamber in the eastern wing of Oakhurst Castle. Through the open window in the calm of the summer evening, came the sweet fragrance of the early violets and budding trees, and to the dying man, it seemed as if earth’s loveliness and beauty were never so apparent as on this bright June day, his last day of life.

His young wife, whom he loved with a devotion and strength that the presence of the king of terrors himself could not alter, moved about the apartment, weeping and sorrowful, sometimes arranging the sick man’s pillow and inquiring of him in low, mournful tones if anything could be done to give him comfort, and again, with stifled sobs, eating some chocolate caramels which she carried in the pocket of her apron. The servants went to and fro with that quiet and subdued tread which prevails in a house where death is an expected guest, and even the crash of broken china and shivered glass, which announced their approach, seemed to fall upon the ear with less violence and sound than usual.

Lord Oakhurst was thinking of days gone by when he wooed and won his beautiful young wife, who was then but a charming and innocent girl. How clearly and minutely those scenes rose up at the call of his memory. He seemed to be standing once more beneath the old chestnut grove where they had plighted their troth in the twilight under the stars; while the rare fragrance of the June roses and the smell of supper came gently by on the breeze. There he had told her his love; how that his whole happiness and future joy lay in the hope that he might win her for a bride; that if she would trust her future to his care the devotedness of his life-time should be hers, and his only thought would be to make her life one long day of sunshine and peanut candy.

How plainly he remembered how she had, with girlish shyness and coyness, at first hesitated and murmured something to herself about “an old bald-beaded galoot,” but when he told her that to him life without her would be a blasted mockery, and that his income was £50,000 a year, she threw herself on to him and froze there with the tenacity of a tick on a brindled cow, and said, with tears of joy, “Henery, I am thine.”

And now he was dying. In a few short hours, his spirit would rise up at the call of the Destroyer and, quitting his poor, weak, earthly frame, would go forth into that dim and dreaded Unknown Land, and solve with certainty that Mystery which revealed itself not to mortal man.

A carriage drove rapidly up the avenue and stopped at the door. Sir Everhard FitzArmond, the famous London physician, who had been telegraphed for, alighted and quickly ascended the marble steps. Lady Oakhurst met him at the door, her lovely face expressing great anxiety and grief. “Oh, Sir Everhard, I am so glad you have come. He seems to be sinking rapidly. Did you bring the cream almonds I mentioned in the telegram?”

Sir Everhard did not reply, but silently handed her a package, and, slipping a couple of cloves into his mouth, ascended the stairs that led to Lord Oakhurst’s apartment. Lady Oakhurst followed.

Sir Everhard approached the bedside of his patient and laid his hand gently on this sick man’s diagnosis. A shade of feeling passed over his professional countenance as lie gravely and solemnly pronounced these words: “Madam, your husband has croaked.”

Lady Oakhurst at first did not comprehend his technical language, and her lovely mouth let up for a moment on the cream almonds. But soon his meaning flashed upon her, and she seized an ax that her husband was accustomed to keep by his bedside to mangle his servants with, and struck open Lord Oakhurst’s cabinet containing his private papers, and with eager hands opened the document which she took therefrom. Then, with a wild, unearthly shriek that would have made a steam piano go out behind a barn and kick itself in despair, she fell senseless to the floor.

Sir Everhard FitzArmond picked up the paper and read its contents. It was Lord Oakhurst’s will, bequeathing all his property to a scientific institution which should have for its object the invention of a means for extracting peach brandy from sawdust.

Sir Everhard glanced quickly around the room. No one was in sight. Dropping the will, he rapidly transferred some valuable ornaments and rare specimens of gold and silver filigree work from the center table to his pockets and rang the bell for the servants.

Sir Everhard FitzArmond descended the stairway of Oakhurst Castle and passed out into the avenue that led from the doorway to the great iron gates of the park. Lord Oakhurst had been a great sportsman during his life and always kept a well-stocked kennel of curs, which now rushed out from their hiding places and with loud yelps sprang upon the physician, burying their fangs in his lower limbs and seriously damaging his apparel.

Sir Everllard, startled out of his professional dignity and usual indifference to human suffering, by the personal application of feeling, gave vent to a most horrible and blighting CURSE and ran with great swiftness to his carriage and drove off toward the city.