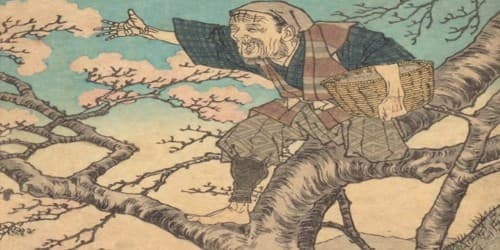 The Man Who Made Trees Bloom

The Man Who Made Trees Bloom (A Japanese Tale)

Long ago an old man and his wife lived simply but happily. They loved each other, and also loved their little dog, Shiro, whose name means “white.” Shiro, you see, was white as new snow, and just as pure of heart.

One day as the old man was working in his field, Shiro, barking furiously, ran to his side. He grabbed the end of the old man’s kimono and urged him toward a large yenoki tree. There Shiro began to dig. Soon the old man fetched a spade to help Shiro with his work and, to his amazement, suddenly struck a heap of gold. Shiro barked excitedly, and the old man showered praise on him. Together they ran home to share their news with the old woman.

But the old man had not noticed that his cruel, greedy neighbor, alerted by the sound of Shiro’s barking, had peered over the bamboo hedge while they dug. When he had seen the gold, his heart had swelled with envy.

The next day the neighbor appeared at the old man’s door. “I wonder if I might borrow your dog for the day,” the neighbor asked. “I need help.”

The old man was very generous, and so, of course, he lent Shiro to his neighbor, but not without saying firmly, “Take good care of him. Shiro is like a child to us.”

The wicked man nodded, and pulling the reluctant dog behind him, he raced to the yenoki tree. “Find some gold for me!” he shouted, and yanked Shiro’s neck and thrust him toward the ground.

Shiro began to dig, but as he did, a terrible odor rose from the earth. Shiro had unearthed a heap of foul garbage.

Enraged, the wicked man struck Shiro with the edge of his spade, then rushed the dog back to his master. “Your dog is ill,” he said, and without another word, he turned and walked away.

All that night the old man and woman nursed poor Shiro, but the injured animal was far too hurt, and by morning he was dead. Sad beyond words, the old man carried his beloved Shiro to the yenoki tree, and there he buried him.

To the old couple’s astonishment, when they looked at the tree the next morning, it had doubled in height. The next day it doubled again, and soon they could not see its highest branches. The old man realized that the tree was filled with Shiro’s generous spirit.

“Let us make a mortar of a branch from this tree. In honor of Shiro and his spirit, we’ll pound our rice and make the finest rice cakes in the world,” said the old woman. The old man agreed that it was a fine idea, and so he worked all day and late into the night. He chopped off a big branch from the tree and fashioned a beautiful mortar from its wood.

When the old woman began to pound the rice, the number of grains began to increase — first doubling, then tripling, on and on. There seemed no end to their bounty. The two old people smiled at each other. “This is our reward for our faithful love,” the old man said. The woman nodded, for they both knew Shiro had once again provided for them.

Soon word of these wonders spread through the village. Everyone was happy about the kind old couple. Everyone, that is, but the greedy neighbor. When he heard the news, he decided he must have that mortar. Again he went to visit the old man, and with false tears said, “I grieve for poor Shiro, too, and wish to make some cakes in his memory. Sadly, I have no mortar to pound my rice. May I borrow yours?”

The old man was too kind to refuse, but after several days, when the neighbor had not returned his mortar, he went to retrieve it.

He found his greedy neighbor tossing pieces of wood into a fire. “Ha,” said the wicked man, “I broke your mortar. When I pounded my rice, a horrid smell came out and choked me. This mortar is no good. Take away the ashes if you wish to remember your foolish dog.”

The old man, heartbroken at losing his precious token of Shiro, picked up the ashes and walked sadly home. As he sat weeping in his garden, a wind came up, blowing some of the ashes into the air.

Suddenly the most amazing thing happened. The leaves on the trees in the garden were green, but the blossoms had long before died and fallen to the ground. Now, as the ashes touched branches, blooms burst forth, and the garden was filled with the most wonderful scent. Again news of this wonder traveled quickly, and the villagers spoke of nothing but Shiro’s spirit.

Word reached the ears of the Daimio, a great nobleman, and he hurried to the old man’s home. “People say you possess ashes that bring the trees to life. I invite you and your wife to live in my estate and share my wealth. In return, I ask only that you spread some of your ashes upon my garden and fill my world with this marvelous scent.”

And so the old man and woman went to live in splendor thanks to the good Shiro’s gifts, and the gardens they tended were always filled with fragrant blooms.

When the wicked man heard the news of his neighbors’ good fortune, he bowed his head. “My greed and envy have left me with nothing but misery. From this day, I will be generous and kind. The old man and his dog have taught me a lesson.”

For years the village sang the praises of the beautiful white dog known as Shiro, who spread not only wealth but goodness, and of the man who could make even winter’s trees bloom.