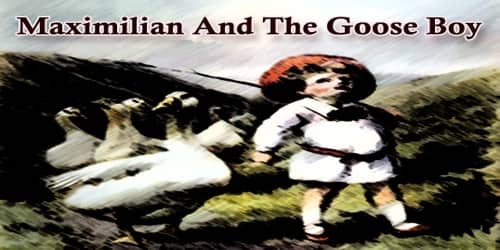 Maximilian And The Goose Boy

One summer day King Maximilian of Bavaria was walking in the country. The sun shone hot, and he stopped under a tree to rest.

It was very pleasant in the cool shade. The king lay down on the soft grass and looked up at the white clouds sailing across the sky. Then he took a little book from his pocket and tried to read.

But the king could not keep his mind on his book. Soon his eyes closed, and he was fast asleep.

It was past noon when he awoke. He got up from his grassy bed and looked around. Then he took his cane in his hand and started for home.

When he had walked a mile or more, he happened to think of his book. He felt for it in his pocket. It was not there. He had left it under the tree.

The king was already quite tired, and he did not like to walk back so far. But he did not wish to lose the book. What should he do?

If there was only someone to send for it!

While he was thinking, he happened to see a little bare-footed boy in the open field near the road. He was tending a large flock of geese that were picking the short grass and wading in a shallow brook.

The king went toward the boy. He held a gold piece in his hand.

“My boy,” he said, “how would you like to have this piece of money?”

“You shall have it if you will run back to the oak tree at the second turning of the road, and fetch me the book that I left there.”

The king thought that the boy would be pleased. But not so. He turned away, and said, “I am not so silly as you think.”

“What do you mean?” said the king. “Who says that you are silly?”

“Well,” said the boy, “you think that I am silly enough to believe that you will give me that gold piece for running a mile, and fetching you a book. You can’t catch me.”

“But if I give it to you now, perhaps you will believe me,” said the king; and he put the gold piece into the little fellow’s hand.

The boy’s eyes sparkled, but he did not move.

The boy said, “I would like to go, but I can’t leave the geese. They will stray away, and then I shall be blamed for it.”

“Oh, I will tend them while you are away,” said the king.

The boy laughed. “I should like to see you tending them!” he said. “Why, they would run away from you in a minute.”

At last the boy gave the king his whip and started off. He had gone but a little way, when he turned and came back.

“What is the matter now?” said Maximilian.

The king tried to do as he was bidden, but he could not make a sound.

“I thought as much,” said the boy. “You don’t know how to do anything.”

Then he took the whip and gave the king lessons in whip cracking. “Now you see how it is done,” he said, as he handed it back. “If the geese try to run away, crack it loud.”

The king laughed. He did his best to learn his lesson, and soon the boy again started off on his errand.

Maximilian sat down on a stone and laughed at the thought of being a goose-herd. But the geese missed their master at once. With a great cackling and hissing, they went, half flying, half running, across the meadow.

The king ran after them, but he could not run fast. He tried to crack the whip, but it was of no use. The geese were soon far away. What was worse, they had gotten into a garden and were feeding on the tender vegetables.

A few minutes afterward, the goose boy came back with the book.

“Just as I thought,” he said. “I have found the book, and you have lost the geese.”

“Never mind,” said the king, “I will help you get them again.”

“Well, then, run around that way, and stand by the brook while I drive them out of the garden.”

The king did as he was told. The boy ran forward with his whip, and after a great deal of shouting and scolding, the geese were driven back into the meadow.

“I hope you will pardon me for not being a better goose-herd,” said Maximilian; “but, as I am a king, I am not used to such work.”

“A king, indeed!” said the boy. “I was very silly to leave the geese with you. But I am not so silly as to believe that you are a king.”

“Very well,” said Maximilian, with a smile; “here is another gold piece, and now let us be friends.”

The boy took the gold and thanked the giver. He looked up into the king’s face and said,–

“You are a very kind man, and I think you might be a good king; but if you were to try all your life, you would never be a good gooseherd.”