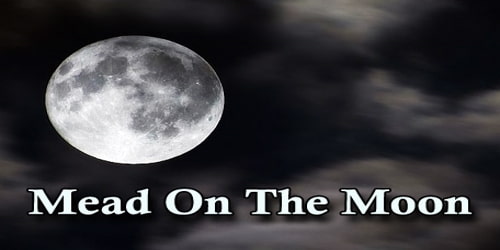 Mead On The Moon

Long ago Odin, the god of wisdom, poetry, and war, decided he would send the handsome young god known as Mani to the sky. There he would drive the moon chariot and fill the night sky with light.

Odin sent along in Mani’s chariot all the things wasted on Earth. He sent misspent time and squandered wealth, broken vows, unanswered prayers, abandoned friends. The chariot was brimming with things wasted – chains to yoke fleas and cages for gnats, unfulfilled promises, and favors, wasted talents. Mani carried the hearts of those who did not love and the memories of those who did not care to remember.

Mani also took two children with him, a fair-haired boy named Hyuki and his sister, who was known as Bil. But Odin had not planned for this to happen. It happened this way.

There was a man named Vidfinner who had two children, Hyuki and Bil. He pretended to love his children, but in fact, Vidfinner loved only the magical elixir known as the mead. He had, long before, so craved this drink that he fought the gods and beat them, and stole from them their magical mead.

The people called Vidfinner by another name. He was known as Svigdur, Champion Drinker, and that was because he loved the taste of his stolen liquid. He loved the taste, yes, but even more he loved the power it gave him. The magical mead gave people strength and power beyond imagining.

“My mead gives me power over even the gods,” Svigdur bellowed to all who would listen. He called to the gods. “I don’t care about you. I have my mead!”

But Svigdur was greedy and never could drink enough to satisfy his cravings for that power. He created a secret spring in the mountains from which bubbled forth his magical mead.

One night, a night filled with wild sounds, Svigdur called to his children. “Go to the mountain spring and fetch me a bucket of mead!”

“But father,” Hyuki begged, “it’s so late and so dark, and we’re afraid. We cannot climb the mountain at night. We might get lost.”

“I don’t care about your fears,” Svigdur shouted. “Go. Go now. I must have more mead.” And with that, he slung a pole and a bucket over the young children’s shoulders.

The two children, shivering with fear, set out for the mountain. They began to climb. They breathed heavily and clutched each other’s hands, for they knew they would have to reach the top and get their father’s mead. If they failed in their task, their father would unleash his terrible fury on them.

Odin looked down on Earth and saw the two children walking to the top of the mountain. When he saw their bucket, he knew where they were headed, and at the memory of Svigdur’s thievery, he bristled with anger. Ever since the day Svigdur had stolen the mead, Odin had vowed he would one day return it to its rightful place in the heavens. And so, with his single, shining all-seeing eye, he watched as the children climbed and climbed.

The children reached the top of the mountain and stumbled their way to the spring. There they dipped their bucket and filled it to its brim. When the bucket was full, they tugged it out, but as they placed it on the pole, they spilled some onto the grass at their feet. With that, the grass grew tall and lush and strong.

“How amazing,” Hyuki said, looking at the growing grass. “This is a magical drink, Bil. We must be very careful not to spill another drop.”

“Yes,” Bil said. “You know, brother, I think this mead may be a gift from the gods.”

“A gift, you say,” Hyuki said. “I think our father stole this mead that was meant for the gods.”

“Perhaps,” Bil said quietly, for she had long wondered about that.

The children, the pole balanced between them, began to walk down the side of the mountain, taking care not to spill another drop. But Odin called to Mani. “You will take those children with you, too,” Odin said. “Their kindness is wasted on Earth with a father who cares only for my potion. Go now. Take those children and their bucket of mead with you and keep them there.”

Mani swept down and took hold of the children. He put them in his chariot, along with the bucket of mead, and as he sped toward the heavens, the Earth was suddenly washed with light the light of Mani’s chariot, of two wasted children and of the bucket of the most magical mead.

Ever since that day Hyuki and Bil have lived upon the face of the moon. Some people say that the dark spots on the moon are the children’s shadows, and others call out to Bil whenever the moon is full. “Drop some of the magical mead on my lips, sweet Bil,” they call, for they too wish to gain the strength that only the magical mead of the moon can impart.

The Edda is the name given to two works or collections of Scandinavian lore. The first was found in 1643 by an Icelandic bishop and consists of mythological and heroic poetry dating from about the ninth century. The Younger Edda, as the second is known was found in 1628 and consists of much Scandinavian mythology, and includes a glossary of poetic expressions, lists of meters and of poets. In the Edda, the son of Mudilfoeri, a god, is known as Mani, or moon.