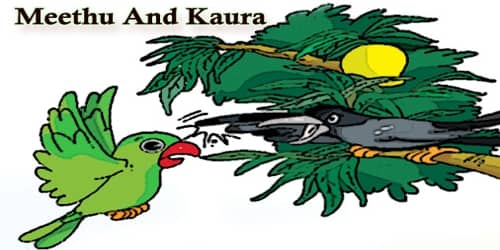 Meethu was a beautiful green parrot. His red beak looked very beautiful. He had built his nest within the bushy branches of a big peepal tree in a village. Every day he would leave in the morning in search of food and return in the evening to spend the night comfortably in his nest.

One day, while he was flying in search of food, he saw a mango tree. It was laden with ripe yellow mangoes.

‘Oh! What nice mangoes!’, he exclaimed. The sight of the ripe, juicy mangoes made his mouth water. He flew down and sat on a branch of the tree. As he was about to eat a mango, he heard the harsh voice of a crow, “Hey! Who are you? This is my tree. My name is Kaura. I say, go away from here,” the crow said.

Meethu looked around and saw a black crow. He was frightened. The crow shouted once again at Meethu asking him to go away. Meethu flew away, but he was very disappointed because he could not eat such lovely juicy mangoes. While flying towards home, he saw a red balloon lying in a garden. An idea struck in the mind of Meethu. He picked up the balloon with its beak and flew back to the mango tree.

He went to the mango tree surreptitiously and blew off the balloon with its beak. The balloon burst with a loud sound. The crow was frightened.

Kaura shouted, “It must be a hunter around! He will kill me. I must fly away from here.”

Saying so, the scared crow flew away from the tree and never returned. Meethu was very pleased to see the crow go. He ate as many mangoes as he could. Thus clever Meethu could scare away the greedy crow by playing a clever trick on him. He began to eat sweet mangoes every day.