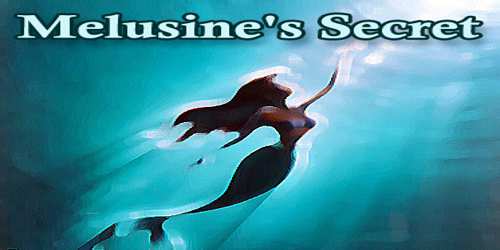 Once upon a time, a Count and his eldest son, Raymond, and a hunting party traveled into the forest to hunt for boar. The men split up; Raymond and his father wandered off alone to the deepest part of the wood, and just as the sun began to set, a huge wild boar charged at them. Raymond reached for his sword to pierce the creature, but when he thrust the blade, the tip glanced off the side of the beast and struck the Count. Raymond rushed to his father’s side, but he was too late. The Count was dead.

Poor Raymond wept, for he loved his father. And he feared that his youngest brothers would believe he had murdered their father. They were jealous of Raymond, for he had always been his father’s favorite.

In despair, Raymond fled deep into the forest. After he had ridden for a while, he came upon a moonlit glade where a large fountain bubbled. Silver water flowed from the fountain and pooled at the feet of the most beautiful woman Raymond had ever seen. Her hair was thick and dark, wavy as the ocean’s surf. She wore a silver dress, the color of moonlight on water, and her skin seemed almost transparent. Raymond thought she must be an angel. Without thinking, he asked, “Who are you? Where are you from?”

The woman smiled. “I am Melusine,” she answered softly, “but you must never ask where I come from. Come and sit with me. You seem so sad.”

Raymond was enchanted. All night long, he and Melusine sat and talked beside the fountain, and he soon confessed his tale of woe.

Melusine touched his hand, and Raymond felt his heart swell with love. “Return to your castle as if nothing has happened,” Melusine instructed him. “No one will suspect you were with your father when he died. Your brothers will believe the boar killed him.”

At dawn, he asked her to marry him.

“I will, she said, but only if you build me a castle near this fountain and here you must let me spend each Saturday alone. You must make sure no one intrudes on me on that day, not even you.”

Raymond promised, and he returned home, and just as Melusine had predicted, no one suspected he had killed his father.

Raymond and Melusine married, and he built her the castle. She called it Lusignan, and the villagers knew her as the Lady of Lusignan. Everyone admired her, and all seemed well. But soon she began to have children, and each child, to Raymond’s shock, was more monstrous-looking than the last. Their first-born son had one red eye and one bright green; the second son had one eye in the center of his head; the third son had long claws and a face covered with hair, and their fourth son had a boar’s tusk protruding from his forehead.

Raymond began to wonder what other secrets his wife possessed, and for a while, he wondered if Melusine might be a witch. But the boys were kind and wise children, and they grew up to be priests and warriors. Raymond felt very lucky, and he continued to love his wife. And he always kept his promise to her. Each Saturday, she spent the day alone at Lusignan.

On Saturday, though, one of Raymond’s brothers came for a visit. “Where is Melusine?” they asked.

“She keeps to herself on Saturdays,” Raymond replied.

“You must follow her and find out what she does on those days, for everyone wants to know her secret. Some say another prince visits her castle. Some say the witches come and prepare brews.”

Raymond ordered his brothers to leave, but when he was alone, he could not stop wondering at the rumors. After a while, he sneaked to Lusignan and stood outside, hoping to see his beloved Melusine. He saw no one, and he began to feel terribly lonely. The world here was too quiet. Even the birds in the trees were quiet here.

He crept closer still, haunted by his brother’s warning. He slipped through the front door. Still, he saw no sign of Melusine, and so crept up the staircase. There he found all the doors locked, and his suspicions overcame him. He peered through a keyhole, and at the sight before him, he gasped. Melusine was in a bathtub. The face and neck were hers; but her body had turned into a bluefish, and the scales shone in the sunlight that streamed through the window.

She was laughing and splashing and obviously, to Raymond’s shock, filled with joy.

Raymond quickly ran out of the castle, vowing he would never say a word to anyone about what he had seen.

Melusine returned home past midnight, and Raymond said nothing. Time passed as it had passed before, but one day Raymond and Melusine received terrible news. They learned that one of their sons, a warrior, had attacked a monastery and killed dozens of monks. One of those monks murdered was the boy’s own brother.

When Raymond heard the news, he could find no peace, and he began, secretly, to blame his wife. She tried to comfort him. “My dearest husband,” she began, but Raymond turned on her and shouted, in a rage, “Stay away from me. You’re an evil serpent!”

Melusine fainted at these words, and Raymond was heartbroken. He tried to rouse her, and he wept and wailed. When she woke, she embraced him and weeping said, “I must leave you now, for you have stolen my deepest secret as you promised you never would.”

With that she rushed out of the house, leaving her footprint on the last stone she touched, and leaving Raymond mourning for the rest of his life.

One night not long afterward, one of the castle maids saw a glimmering figure standing near the cradle of the youngest child, Raymond’s remaining joy.

She thought the figure must be Melusine, but when looked more closely, she saw that the figure had a scaly blue fishtail.

The maid was so captivated by this vision, she could not cry out, and at dawn she saw the mermaid kiss her child goodbye and slip away.

For many centuries afterward, the castle of Lusignan stood empty, and the villagers say it is haunted still by the ghost of the vanished countess, half woman, half fish, the beautiful Melusine.

“This French legend dates back to the 14th century and was among the most popular of medieval legends. “Melusine” remains among the world’s best-known mermaids.”