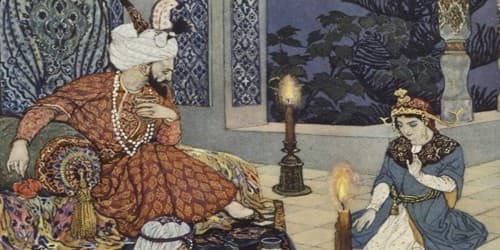 Long ago there was a wealthy merchant who loved his only son Ahmed with all his heart. Sadly, Ahmed was the laziest boy in Persia. He and his friends spent their days upsetting the marketplace, tugging on cats’ tails and bullying children. They refused to do one bit of work.

The merchant lectured his son. “Ahmed, you must not waste your talents. You must learn to work. You must make something of your life.”

Ahmed only laughed at his father.

In despair, the merchant decided he must assure his son’s future. After careful thought, he secretly cut a hole in his bedroom ceiling. Inside the hole, he hid 1,000 gold coins. He patched the hole and placed a hook in the center of the patch.

“Will you hang a lamp from that horrid hook, Father?” Ahmed sneered.

“Listen to me carefully, son. When you have lost everything, come to this spot with a rope,” he began, but his son cut off his words with a laugh.

“Father, it is a sin to take one’s life. Besides, I’m having fun in this world,” and he skipped off to join his friends.

A year later the merchant died. Ahmed briefly mourned his loss, but then began to spend his father’s money. He purchased expensive clothing and rich food and cases of wine. When he ran out of money, he sold his father’s tapestries and tea sets. When the house was empty of all treasures, Ahmed chopped up most of the furniture and sold the wood for kindling. Before long he had nothing left.

He refused to think about his plight until one day, his companions said, “Ahmed, you have not given us any gifts for a long while. Why not treat us to a feast tomorrow?”

Ahmed agreed for he dared not tell his friends that he now was penniless. He feared he would lose them as well. As he walked home, he began to wonder how he would keep his promise.

Suddenly he remembered his elderly aunt. He went to see her and begged for help. She was so brokenhearted at the sight of her poor nephew, she took her favorite candlesticks to the market and sold these for a handsome sum. This she gave to Ahmed.

Ahmed bought a feast fit for kings. He did not give a single thought to his old aunt.

The next morning he packed his treats in a cloth and set off to meet his friends. The day was hot and his walk was tiring, so he sat down to rest. Before long he fell asleep. Ahmed woke with a start to see a wild dog running off with the bundle of treats clutched in his teeth.

Empty-handed, Ahmed went to his friends and told them about the dog.

“Good-for-nothing,” said his friends. “You don’t have enough to your name to make you worthy of being our friend. Go away from us.”

At that moment the merchant’s son thought about his father. Remembering the hook in the ceiling, he decided that for once in his life he would do as his father had asked.

Back at his home, he fetched a rope and placed a stool beneath the hook. He climbed up, tied the rope to the hook and, testing its strength, pulled on the rope. To his amazement, the ceiling broke open and gold coins poured down upon his head.

Now the boy realized how much his father had loved him. He vowed, in Allah’s name, to stop his lazy ways. He promised he would not squander his father’s last gift.

He began to work hard. He hired back his father’s old servants, and together they rebuilt the merchant’s shop and worked day and night until the business was thriving once again.

Ahmed invited his old companions to meet him for a feast. When the boys arrived at the appointed place, Ahmed showed them his empty sack. “Imagine, my friends, this morning while my cook was preparing our food, a mouse made off with her knife. Sadly I have nothing to give you.”

“Never mind,” said the first boy. “The same happened to me one day. Our cook was preparing the salad and a mouse made off with her greens.”

The second boy patted Ahmed’s shoulder. “I remember once a mouse stole our frying pan from underneath the poor cook’s nose.”

“And in my home, a mouse made off with everything in our kitchen, including the cook,” said the third boy.

Ahmed lowered his head. “Some time ago, in this same place, I told you a true tale about a stray dog. You laughed and would not call me a friend. Today you know that I have regained my wealth, and when I tell you a ridiculous tale of a mouse, you invent stories just to show me you will accept me as a liar. I am not the boy you once knew. I am no longer a lazy fool. I know now that true friends will stand beside us when misfortune is ours.”

Ahmed mounted his horse and galloped to his aunt’s house to repay her for what she had done for him. And from that day on, he worked harder than any lad in Persia, and he grew to be as generous and wise as his father had been.