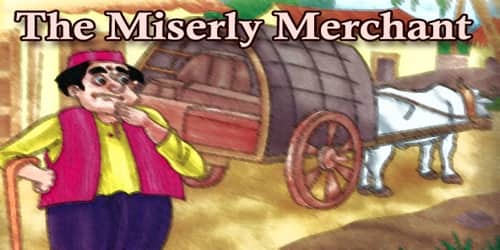 There once was a rich merchant in Bonga. He was so miserly that no one likes him. He never paid his taxes, and he saved every paisa he had. One day, he had to take his goods to another town to sell. But, to reach the town he had to undertake a risky journey through the forest. The forest was known for robbers and animals. “Hmm…. I think I will need to hire a helper. What a nuisance!” he thought. He decided he would pay only ten rupees to the helper, and he went to the market looking for one.

The first man he asked refused. “I can’t take such a big risk for just ten rupees!” he said. The next person he asked demanded hundred rupees. “It’s not an easy job! You should pay accordingly,” said he.

The merchant went from one man to the next, but no one was willing to come for ten rupees. The merchant was disgusted. “The town is full of wastrels! So money-minded! No one wants to do an honest day’s work!”

While the merchant pondered what to do, a man came to him. “I can take you,” he offered. It was Kaloo, the town simpleton, “I don’t mind working for ten rupees,” he said. The merchant was doubtful. “This man is a fool. How can I hire him?” But he had no choice. It was either the simpleton or a hundred-rupee expense.

“All right,” he reluctantly agreed. Kaloo demanded his ten rupees in advance, and the miser gave it to him. The two set off through the forest in a cart with the goods. They hadn’t gone very far when they heard footsteps. “It must be robbers!” said kaloo. The hurriedly got off and pulled the cart behind some trees.

Kaloo hid behind one bush, and the merchant behind another. They waited anxiously as the robbers came closer. Suddenly, one of the robbers tripped over Kaloo’s leg. Dusting himself off, he said, “Must have been a tree root!” The fool that he was, kaloo got angry and said, “Does my leg look like a root to you?” The robbers immediately dragged him out of the bush. “Hand over all your money!” they said. kaloo handed over his ten rupees. “It’s all I have,” he said. “You can take it if you like.” The merchant trembled in his hiding place.

The robbers looked at the note. “This looks like a fake note to me!” said one of the robbers. Kaloo was indignant. “Of course not! It’s genuine!”

“How do we believe you?” asked the robbers. “Ask my master!” said foolish kaloo. The merchant silently cursed the simpleton. The robbers hunted around for the merchant. They soon found him behind the bush and dragged him out. They took all his money and soon found his cart away. “This is all because I hired a fool!” he lamented. The merchant returned home, depressed. “I should have hired a better man instead of being miserly! Now instead of losing just a hundred rupees, I’ve lost all my goods!”

A few days later, the gang of robbers was caught. All the stolen goods were recovered and returned to the rightful owners. A king’s messenger came and told the merchant that his goods had been found. “Wonderful! When can I collect them?” asked the joyous merchant. “Well, since you haven’t paid your taxes in a long time, the king decided to keep the goods as payment!” replied the messenger.