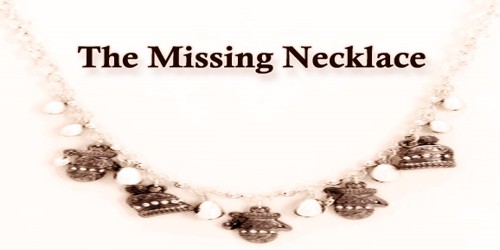 One day, the chief queen of King Brahmadatta wished to swim in the lake in the royal garden and left her jewelry with the servant girls before taking a dip in the water. Now, this garden was home to many monkeys.

One she-monkey had been sitting on the branch. She got particularly interested in a beautiful pearl necklace that belonged to the queen. “Now I know why the queen always looks so charming. If I wear that pearl necklace, then I shall look as beautiful as her,” thought she and waited patiently for the right moment to steal the necklace.

After a while, when the servant girl dozed off, the monkey swung down from the tree and grabbed the necklace in a flash and disappeared into the thick foliage of the tree. When the news of the theft reached the King, he ordered his guards to leave no stone unturned to catch the thief. Just then a poor man was passing by the garden. The hullabaloo from inside the garden scared him and he ran away. Seeing him run, the guards took him to be the thief and after chasing him for some distance, they captured him. When he was produced before the king, he said he had stolen the necklace and added that the chief financial advisor had asked him to do so and that the necklace should be with him.

When the chief financial advisor was questioned he passed the responsibility to the royal priest, who in turn passed it on to the chief court musician and he again involved the chief court dancer. But when the dancer was summoned to the court, she denied the allegation altogether.

At the end of the day, the king was confused and ordered all of them to be put behind bars.

The Bodhisattva, who was at that time a minister to the king, did not quite believe that these detainees were the actual culprits because the theft had taken place inside the heavily guarded garden. It would not be possible for any of them to go and steal it from there. “I am sure they are lying out of fear. The poor man must have involved the advisor to save himself. The advisor then must have involved the priest thinking that it would be easier for him if he involved someone very important. I believe the priest involved the musician thinking that if all were imprisoned then music could heal their pain and the musician felt the same way when he involved the dancer,” he thought and was quite confident that it was the work of a she-monkey.

So, he ordered all female monkeys to be captured and adorned them with imitation jewelry. Then the monkeys were released by the king’s men, who kept a close watch on them.

Now, the actual culprit had hidden the necklace in a hollow of the tree. When her companions flaunted their jewelry with an air of pride, she could not control herself any longer. To make them realize that it was actually a better necklace, she brought the necklace out and wore it around her neck. The guards noticed and scared the monkey to drop it. The queen got her necklace back and all the detainees were released from custody.