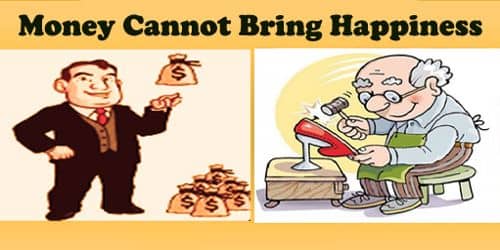 There lived a happy cobbler who passed his days working and singing from morning till night. A rich neighbor of his was a banker who one day said to him ‘How much a year do you earn?’ The cobbler replied, “I earn enough to make both ends meet.” “I am sorry for that. You must be living in great distress,” said the banker. “But I am used to this sort of life and I am happy,” said the cobbler.

The next day the rich banker again came to visit the cobbler. He came with ten thousand taka in a bag. He said to him, “Look, my friend! I’ve brought ten thousand taka for you. Keep this money and remove your distress.” The cobbler was greatly surprised. At first, he refused to take the money. The rich man told him that he could use the money in times of difficulties. The cobbler took the bag of money from the rich man and thanked him.

Now new thinking took hold of the cobbler. He said to himself, “Ten thousand taka is a lot of money.” He could not think where to keep the money. He did not find any safe place to keep the bag. He dug a hole in his hut and kept the money there. But he always thought that his money could be stolen at any time. This anxiety kept him awake and his sleep fled away at night. He even could not devote himself to his work. As a result, his life became more miserable. Peace and happiness vanished from his life. The cobbler gradually realized that he had money, but no peace of mind.

So, one morning the cobbler went to the banker’s house and returned the money. From then on, the cobbler could pass his days with singing and great happiness as before.