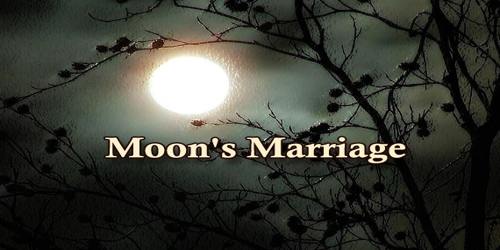 Long before Moon lived in the sky, she was a maiden who married the chief of a village on the Rio Grande River. Nah-chu-ru-chu, “Blue Light of Dawn,” was the chief’s name. He was strong and kind, and all the women of the village loved him. But Nah-chu-ru-chu married Moon, for she won his heart.

Alas, two of the maidens in the village were powerful witches. The Yellow Corn Maidens loved Nah-chu-ru-chu, and they vowed vengeance when he married Moon. Nah-chu-ru-chu warned his wife to watch out for the witches. “They mean you harm,” he said.

She was careful, but one day, as the women were out in the cottonwood grove together, the Yellow Corn Maidens, spotting a pozo, or well, called to Moon, “Come drink.”

Remembering her husband’s warnings, Moon refused, but soon afterward they called to her again. “Oh, come and look in the still water and see your pretty face.” Moon had always loved to look at her reflection in the water, just as she does now, and without thinking, she walked to the brink of the well. The two maidens pushed her in, and returned to the village without her.

That evening when his wife did not return, Nah-chu-ru-chu called upon the Yellow Corn Maidens. “Where is my wife?” he demanded.

“Oh, she returned before us,” they said, but Nah-chu-ru-chu knew something was wrong. He began to search for Moon. He searched the whole cottonwood grove, calling and calling, but he could not find his wife.

Grieving, he climbed to the highest point in town and put his head in his hands and wept. There he sat, refusing to move or speak or eat. The people begged him to come down, for they knew their village would fail without him, but Nah-chu-ru-chu simply stared into the distance.

So the people called on Eagle, for he had the sharpest eyesight of all the people and creatures. Eagle soared into the sky and searched everywhere, but he could not find Moon.

Next, the people called on Coyote, for his nose was sharpest in all the world. Coyote at once set off, his nose to the ground. He searched high and low, but he too failed to find Moon.

Then the people called on Badger, for he was the best digger. Badger dug all around the village, but he did not find Moon either.

“Osprey will find her,” the people said. Osprey sailed into the sky, high above the ponds and rivers, and looked into the waters. He counted every pebble and every fish, but he could not find Moon.

By now the crops were dying in the fields, and the animals were hungry. The people were so sad they could not work, for they knew Moon must be dead. And so they called to Buzzard, for he is best able to find the dead. Buzzard sadly agreed to search for her. “The others are mightier than I, and they have failed, but I promise I will try to find Moon.”

He spread his wings and soared into the sky, higher and higher until even Eagle could not see him. Still, he did not find Moon.

“I did not see her,” he said, “but when I was flying home I saw a place in the cottonwood grove covered with the most beautiful flowers.”

“Ah!” cried Nah-chu-ru-chu, coming to life. “Bring me one of the flowers.”

Buzzard flew off, returning with the flower. Nah-chu-ru-chu carried the flower into his house. All the people followed him.

Inside he laid the flower upon a beautiful cape and placed another cape above this. Then, dressing himself in a buckskin suit Moon had made for him, and holding a sacred rattle, he began to sing. As he sang, the flower began to grow.

The chief lifted the cape and sang again and shook his rattle, and still, the flower grew. When he had finished the song for the fourth time, the people saw that a human form lay between the capes. And when he sang for the fifth time, the form sat up and moved. He tenderly lifted the cloth and there sat sweet Moon, fairer than ever.

“Now we will live happily,” Nah-chu-ru-chu announced, “but the Yellow Corn Maidens must be punished.”

The chief made a hoop with many strings and beads, and Moon called the Yellow Corn Maidens to play with her. She rolled the hoop to them, and as it came toward them, they both grasped it. The moment they did, they turned into two great snakes with tears rolling down their faces.

“This is the reward of treacherous friends,” Moon said. “You will live here forever, among the cliffs and rocks, and you will always be gentle and tame.”

Then she returned to her husband, and they were happy together for many years, but the Yellow Corn Maidens remained forever snakes. They live still among the rocks and cliffs, and never venture far. Sometimes people bring them home to catch mice, for these snakes never harm human beings. Their days of harm ended when they tried to hurt Moon.