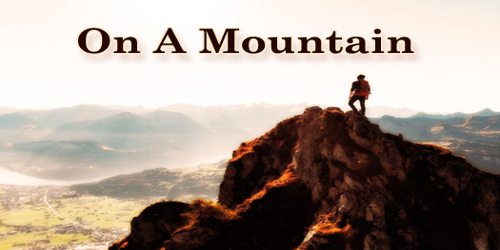 They say that the lumberman has looked upon the Cheat Mountain country and seen that it is good, and I hear that some wealthy gentlemen have been there and made a game preserve. There must be lumber and, I suppose, sport, but some things one could wish were ordered otherwise. Looking back upon it through the haze of near half a century, I see that region as a veritable realm of enchantment; the Alleghenies as the Delectable Mountains. I note again their dim, blue billows, ridge after ridge interminable, beyond purple valleys full of sleep, “in which it seemed always afternoon.” Miles and miles away, where the lift of earth meets the stoop of sky, I discern an imperfection in the tint, a faint graying of the blue above the main range the smoke of an enemy’s camp.

It was in the autumn of that “most immemorial year,” the 1861st of our Lord, and of our Heroic Age the first, that a small brigade of raw troops were all raw in those days had been pushed in across the Ohio border and after various vicissitudes of fortune and mismanagement found itself, greatly to its own surprise, at Cheat Mountain Pass, holding a road that ran from Nowhere to the southeast. Some of us had served through the summer in the “three-months’ regiments,” which responded to the President’s first call for troops. We were regarded by others with profound respect as “old soldiers.” (Our ages, if equalized, would, I fancy, have given about twenty years to each man.) We gave ourselves, this aristocracy of service, no end of military airs; some of us even going to the extreme of keeping our jackets buttoned and our hair combed. We had been in action, too; had shot off a Confederate leg at Philippi, “the first battle of the war,” and had lost as many as a dozen men at Laurel Hill and Carrick’s Ford, whither the enemy had fled in trying, Heaven knows why to get away from us. We now “brought to the task” of subduing the Rebellion a patriotism which never for a moment doubted that a rebel was a fiend accursed of God and the angels one for whose extirpation by force and arms each youth of us considered himself especially “raised up.”

It was a strange country. Nine in ten of us had never seen a mountain, nor a hill as high as a church spire until we had crossed the Ohio River. In power upon the emotions nothing, I think, is comparable to the first sight of mountains. To a member of a plain-stribe, born and reared on the flats of Ohio or Indiana, a mountain region was a perpetual miracle. Space seemed to have taken on a new dimension; areas to have not only length and breadth but thickness.

Modern literature is full of evidence that our great grandfathers looked upon mountains with aversion and horror. The poets of even the seventeenth century never tire of damning them in good, set terms. If they had had the unhappiness to read the opening lines of “The Pleasures of Hope,” they would assuredly have thought Master Campbell had gone funny and should be shut up lest he do himself an injury.

The flatlanders who invaded the Cheat Mountain country had been suckled in another creed, and to them western Virginia there was, as yet, no West Virginia was an enchanted land. How we reveled in its savage beauties! With what pure delight we inhaled its fragrances of spruce and pine! How we stared with something like awe at its clumps of laurel! Real laurel, as we understood the matter, whose foliage had been once accounted excellent for the heads of illustrious Romans and such mayhap to reduce the swelling. We carved its roots into finger-rings and pipes. We gathered spruce-gum and sent it to our sweethearts in letters. We ascended every hill within our picket-lines and called it a “peak.”

And, by the way, during those halcyon days (the halcyon was there, too, chattering above every creek, as he is all over the world) we fought another battle. It has not got into history, but it had a real objective existence, although by a felicitous afterthought called by us who were defeated a “reconnaissance in force.” Its short and simple annals are that we marched a long way and lay down before a fortified camp of the enemy at the farther edge of the valley. Our commander had the forethought to see that we lay well out of range of the small-arms of the period. A disadvantage of this arrangement was that the enemy was out of reach of us as well, for our rifles were no better than his. Unfortunately one might almost say unfairly he had a few pieces of artillery very well protected, and with those he mauled us to the eminent satisfaction of his mind and heart. So we parted from him in anger and returned to our own place, leaving our dead not many.

Among them was a chap belonging to my company, named Abbott; it is not odd that I recollect it, for there was something unusual in the manner of Abbott’s taking off. He was lying flat upon his stomach and was killed by being struck in the side by a nearly spent cannon-shot that came rolling in among us. The shot remained in him until removed. It was a solid round-shot, evidently cast in some private foundry, whose proprietor, setting the laws of thrift above those of ballistics, had put his “imprint” upon it: it bore, in slightly sunken letters, the name “Abbott.” That is what I was told I was not present.

It was after this when the nights had acquired a trick of biting and the morning sun appeared to shiver with cold, that we moved up to the summit of Cheat Mountain to guard the pass through which nobody wanted to go. Here we slew the forest and builded us giant habitations (astride the road from Nowhere to the southeast) commodious to lodge an army and fitly loopholed for discomfiture of the adversary. The long logs that it was our pride to cut and carry! The accuracy with which we laid them one upon another, hewn to the line and bullet-proof! The Cyclopean doors that we hung, with sliding bolts fit to be “the mast of some great admiral!” And when we had “made the pile complete” some marplot of the Regular Army came that way and chatted a few moments with our commander, and we made an earthwork away off on one side of the road (leaving the other side to take care of itself) and camped outside it in tents! But the Regular Army fellow had not the heart to suggest the demolition of our Towers of Babel, and the foundations remain to this day to attest the genius of the American volunteer soldiery.

We were the original game-preservers of the Cheat Mountain region; for although we hunted in season and out of season over as wide an area as we dared to cover we took less game, probably, than would have been taken by a certain single hunter of disloyal views whom we scared away. There were bear galore and deer in quantity, and many a winter day, in snow up to his knees, did the writer of this pass in tracking bruin to his den, where, I am bound to say, I commonly left him. I agreed with my lamented friend, the late Robert Weeks, poet:

Pursuit may be, it seems to me,

There can be no doubt that the wealthy sportsmen who have made a preserve of the Cheat Mountain region will find plenty of game if it has not died since 1861. We left it there.

Yet hunting and idling were not the whole of life’s programme up there on that wild ridge with its shaggy pelt of spruce and firs, and in the riparian lowlands that it parted. We had a bit of war now and again. There was an occasional “affair of outposts”; sometimes a hazardous scout into the enemy’s country, ordered, I fear, more to keep up the appearance of doing something than with a hope of accomplishing a military result. But one day it was bruited about that a movement in force was to be made on the enemy’s position miles away, at the summit of the main ridge of the Alleghanies the camp whose faint blue smoke we had watched for weary days. The movement was made, as was the fashion in those ‘prentice days of warfare, in two columns, which were to pounce upon the foeman from opposite sides at the same moment. Led over unknown roads by untrusty guides, encountering obstacles not foreseen miles apart and without communication, the two columns invariably failed to execute the movement with requisite secrecy and precision. The enemy, in enjoyment of that inestimable military advantage known in civilian speech as being “surrounded,” always beat the attacking columns one at a time or, turning red-handed from the wreck of the first, frightened the other away.

All one bright wintry day we marched down from our eyrie; all one bright wintry night we climbed the great wooded ridge opposite. How romantic it all was; the sunset valleys full of visible sleep; the glades suffused and interpenetrated with moonlight; the long valley of the Greenbrier stretching away to we knew not what silent cities; the river itself unseen under its “astral body” of mist! Then there was the “spice of danger.”

Once we heard shots in front; then there was a long wait. As we trudged on we passed something some things lying by the wayside. During another wait we examined them, curiously lifting the blankets from their yellow-clay faces. How repulsive they looked with their blood-smears, their blank, staring eyes, their teeth uncovered by contraction of the lips! The frost had begun already to whiten their deranged clothing. We were as patriotic as ever, but we did not wish to be that way. For an hour after-ward the injunction of silence in the ranks was needless.

Repassing the spot the next day, a beaten, despirited and exhausted force, feeble from fatigue and savage from defeat, some of us had life enough left, such as it was, to observe that these bodies had altered their positions. They appeared also to have thrown off some of their clothing, which lay nearby, in disorder. Their expression, too, had an added blankness they had no faces.

As soon as the head of our straggling column had reached the spot a desultory firing had begun. One might have thought the living paid honors to the dead. No; the firing was a military execution; the condemned, a herd of galloping swine. They had eaten our fallen, but touching magnanimity! We did not eat theirs.

The shooting of several kinds was very good in the Cheat Mountain country, even in 1861.