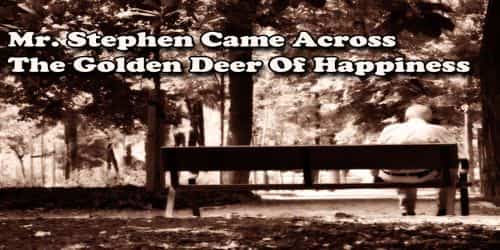 Mr. Stephen Came Across the Golden Deer of Happiness

Mr. Stephen was an American, of about sixty years old. He came to Bangladesh to Visit Important places. But what impressed him most were the natural beauty of this country and the amicable attitude of the country people. Once he became sick at the time of visiting Mohastangarh in Bogra. As he was alone, no one was there to take care of him. A man named Abdul of a nearby village saw him and took him to the hospital. After the necessary treatment, Abdul took Mr. Stephen to his own house. He provided him foods, medicines and proper nursing and Mr. Stephen was recovered from his illness soon. But quite amazingly, he did not want to leave Abdul and his family because he was moved at their behavior. Even he had no intention to go to his own country.

The reason was that his wife left him and married another man. His three sons worked at different places and they never take any care of him. Being frustrated by them, he was moving from one country to another to find peace. He had a strong hatred on the society and human relationship. But Abdul’s family had turned over a new leaf in his life. He found the real meaning of life. He also got the definition of peace and happiness from Abdul who was a poor village farmer.