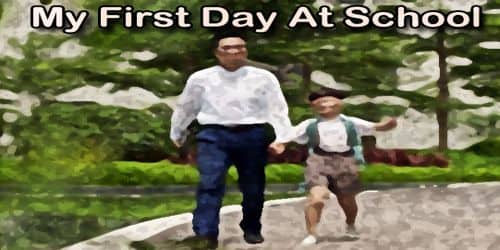 My First Day At School

When I was five years old, my father took me to a school quite far away from our home. There I followed my father to a room where I saw a big bald-headed man. He looked pleased to see my father but I got frightened when he asked me some questions. In the beginning, I became nervous to answer the questions. But the man who was the headmaster of that school was very helpful and joyous. He tried to make me normal by smiling and giving me candy. Gradually I was trying to overcome my nervousness. Then I tried to answer the questions. Firstly he asked my name and parent’s name. Then he asked where we lived. I answered him nervously. After some time he asked me to recite a poem of poet Nazrul Islam. I knew a poem of Nazrul and I recited it. Then the headmaster became very pleased. He also asked me to write some rhymes of English. I wrote four lines from my memory that my mother taught me at home.

Finally, he asked me a question about our country. I answered it properly. Being charmed he gave my father an admission form and told him to submit it. My father wrote down the information as required in the form and submitted it to the headmaster. After that, he gave my father the admission receipt and told him to submit the admission fee to the accounts office. My father deposited the money and submitted the form that day I got myself admitted to that school. It was the first day of my school and I will never forget the memory of that day.