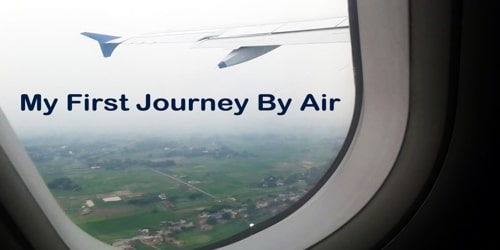 My First Journey By Air

I live in Chittagong. My elder brother works in Sylhet. Last summer he asked me to stay days with him and sent me a plane ticket. That was my first Journey by air. I arrived at the airport about an hour before the flight and cheeked is and waited in a lounge. I was given a boarding card on which the number of seats was written. The departure of my flight wag announced and the passengers were asked to board the plane. I got on board and found my seat. When the plane was ready to take off, we were asked to fasten our seat-belts. We were also given instructions about what to do in case of an emergency. Then the plane took off smoothly.

A few minutes later, we were given newspapers. I was reading the headlines when a Stewardess came with orange and lemon squash. I took a glass and looked through the window. There were clouds floating around the plane. Houses and trees below looked like tiny toys. Rivers flowing below appeared to be thin lines drawn on a sheet of paper. Suddenly it was announced that we were very close to Sylhet International Airport and we would be landing in a few minutes. I had no idea that the flight would be so short. However, the plane began to come down and landed safely. I really enjoyed the flight very much. When I came out of the airport, I found my brother waiting to receive me.