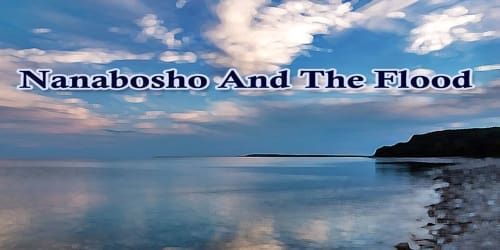 Nanabosho was a trickster. He was part human, part spirit, and part creature, too. Nanabosho had been raised by wolves, and his closest friend in all the world was the wolf he called his nephew.

One day Nanabosho returned to the home he shared with his beloved nephew. He called out to him, “I am home,” but he heard only silence, and he knew something was wrong. He feared that one of his enemies had come to take revenge.

Now his nephew was nowhere to be found.

Nanabosho grabbed his bow and arrows and set off to find his beloved friend. He climbed mountains and trudged through valleys. He crossed streams and vast plains. As he walked he called for his nephew, howling out his name, but no one called back to him.

At long last, Nanabosho reached the shores of Lake Manitou.

He peered down into the choppy waters, seeking the serpent who lived down there, among other serpents and evil spirits. The great serpent himself, a huge, multi-colored scaly creature, terrified most people, but Nanabosho was not afraid. And when he looked down, staring so hard he was able to see through the murky darkness of that deep lake, he saw the serpent coiled around his nephew’s lifeless body. That was when he knew he must destroy the serpent.

Nanabosho looked up at the sky and ordered the clouds to vanish. This they did.

Then Nanabosho closed his eyes and whispered, “Wind stop,” and the wind ceased to blow.

The air above the lake grew still. Nothing moved; not a single leaf trembled. Silence filled the world.

Then Nanabosho looked up again. “Sun,” he commanded, “burn as hot as you can.”

Nanabosho’s plan was to boil the water of Lake Manitou, for when the water boiled, the great serpent would have to rise to the surface and show himself.

When the sun began to blaze, Nanabosho found a cool spot in the midst of a stand of trees. There he closed his eyes and invoked his magic, changing himself into a tree stump so that no one would recognize him.

The sun burned down and the lake grew warm.

The sun burned hotter and the lake simmered.

The smaller serpents, squirming in the heat, came to the surface to see what was happening. “Why is the water so hot?” they gasped to each other.

“It is that trickster Nanabosho,” someone said, but when they looked around, they saw no one. So they dived beneath the surface and swam down and down to seek the wisdom of the great serpent.

Now the water began to boil, and no one could bear that kind of heat. Even the great serpent himself rose from his deep place and uncoiled toward the water’s surface. The serpent swam toward shore, and the smaller serpents and spirits followed close behind.

Now the great serpent is difficult to fool, so when he crawled onto the shore and noticed a tree stump he had never before seen, he said, “This must be the work of Nanabosho.” He sent his smaller serpents to attack the stump.

They swarmed around Nanabosho, but the trickster stood very still, not even breathing. And when the serpents failed to rouse the stump, the Great Serpent cried, “Stop.”

Exhausted from the heat, the great serpent and all the evil spirits and little serpents fell asleep. When Nanabosho knew they were fast asleep, he drew an arrow from his quiver. He aimed at the great serpent’s heart.

The arrow struck home. The great serpent woke at once, squealing so loudly that the mountains shook. Writhing in agony and whipping the great coils of his body in swirls, he headed for the water and dived to the bottom. Down there he tore Nanabosho’s nephew into a hundred pieces.

Knowing he soon would die, the great serpent began to blow outward, and he slapped his tail hard, again and again. The water of Lake Manitou began to swell, up and up, and soon it spilled onto the land.

The great serpent slapped his tail again and a flood surged into the valleys. Nanabosho raced for the village to warn the people. “Quick, run to the mountains, a flood is coming,” he cried.

The people climbed to the top of the highest mountains, but the water kept rising. When Nanabosho saw that no one was safe, he cast a speck of dirt into the water. From this speck, he formed an island, and on this island, he gathered as many of the people and the animals as he could.

Nanabosho watched as the water surged higher until every mountain was covered. Only Nanabosho and those who were upon his island were saved.

When the waters began to recede, Nanabosho sent a bird to circle the island, and as the bird circled, the island grew larger and larger. Everyone else was drowned in the flood, but the people Nanabosho had gathered up survived. And when the dying serpent breathed his very last foul breath, life began once again.