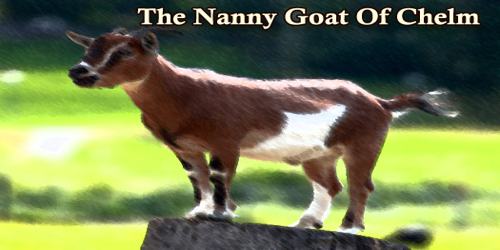 The Nanny Goat Of Chelm

One day the rabbi of Chelm fell terribly ill, and though he was the wisest man in the village, he could not cure himself. And so he called for the doctor of Chelm, who examined the rabbi and sadly shook his head.

“The only cure is fresh goat’s milk,” the doctor declared. “But alas, we have no goats in Chelm.”

“That’s easy to fix,” the rabbi said, and he sent two of his disciples to the next village to buy a nanny goat.

The two men quickly traveled to the next village and bought a beautiful white nanny goat. “Will she give milk?” they asked the goat dealer.

“More milk than anyone could drink,” the dealer declared, and so the disciples, pleased with their find, began to walk back home, pulling the goat behind them.

On their way they stopped at an inn to quench their thirst, and they began to talk delightedly about their wonderful nanny goat. “She gushes milk like a fountain,” they declared as they raised their glasses to toast their good fortune.

Now the innkeeper overheard them, and because he disliked the people of Chelm and thought them fools, he decided he would play a prank on them. While the men celebrated, the innkeeper sneaked to the stable and untied the nanny goat. In its place he tied his own white billy goat.

When the disciples went to the stable, they unknowingly untied the billy goat and walked back to Chelm, calling all the way, “We’ve brought the rabbi’s cure.” The people of Chelm followed them all the way to the rabbi’s house.

“Your cure, rabbi,” they cried. The rabbi smiled, and slowly made his way to the door of his house. His wife sat down upon a stool, preparing to milk the nanny.

Alas, try as she would, she could not get a drop of milk from the creature. “You’ve bought a goat who gives no milk,” she cried.

“Ah, don’t be hasty,” said the men. “The Torah teaches us that everything must be done with knowledge and understanding. Obviously we need a goat owner who knows how to milk goats.”

So they called upon the butcher, for once upon a time he owned goats. And the moment he saw the goat, he knew. “This is a billy goat!” he cried.

The rabbi’s followers were furious. “That merchant pulled a fast one on us, and he’ll pay for his trick!” And although it was late afternoon by now, they set off right away, pulling the billy goat behind them, to see the goat dealer.

On their way, they stopped at the same inn for a drink. “You’ll never believe what happened,” they told whoever would listen, and they regaled their listeners with the tale. “We’re off to punish the goat dealer,” they said.

Well, when the innkeeper heard this, he quickly went to the stable and once again exchanged goats. This time he tied the nanny goat to the post where the men had left their billy goat.

When the disciples had finished their drinks, they went to the stable, untied the goat and departed. When they reached the goat dealer’s home, they called furiously to him. “You’ve cheated us!” they cried. “This goat has no milk. This is a billy goat!”

The goat dealer was shocked. “But that’s not possible,” he said, and he sat upon a stool and reached beneath the nanny goat and began to milk her. In moments he had filled a pail with thick goat’s milk. “There, you see,” the dealer said. “She’s just as I promised. Now are you satisfied?”

The men were amazed, but then, certain that the dealer was trying to fool them, they called for the local rabbi. “We want a document that certifies that this is a genuine nanny goat,” they said.

“I’m happy to oblige,” the rabbi said, and he penned a document, signed it and sealed it. “This will certify the facts,” he declared.

Overjoyed, the men began the journey back to Chelm. On the way, of course, they stopped off at the inn, and this time, once again, the innkeeper exchanged the nanny for his white billy.

When the disciples reached the rabbi’s home, they cried out to him. “She’s here! She will give milk! The rabbi from the village has certified this!”

The wife of the ailing rabbi sat down to milk the goat. Once again, the goat gave not one drop. “Fools!” she cried. “You have been cheated a second time!”

The men were dumbfounded, and so was the rabbi. “Here is the village rabbi’s document,” they said. “What do you make of this? What can this mean, dear rabbi?”

Now the rabbi had to think. He thought hard, for he always thought hard. He read the other rabbi’s document. He frowned. He scratched his head. For a long, long time he sat this way, thinking over all that had happened. He knew a rabbi never wrote something that wasn’t true. This must be a nanny goat. The other rabbi said it was.

And then at last, he understood. He knew just what had happened. He called his wife and his disciples to his bedside, and looking very serious, staring over his spectacles, he quietly explained.

“The luck of Chelm,” the people said sadly, but the rabbi traveled to the next village and drank buckets full of fresh goat’s milk, and before long he was well again, and just as wise as ever.