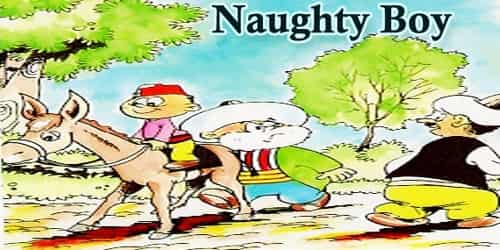 One day the Hodja bought a donkey at the market place. He held his new donkey by its halter and started to walk towards home, pulling the donkey behind. Two rogue teenagers saw the Hodja and his donkey and decided to play a trick on the Hodja. They were going to steal the donkey and see if they could get away with it.

One of the rascals quietly came up behind the Hodja, loosened the halter, took it out of the donkey’s neck and put it around his own neck. The other boy took the donkey back to the market to sell. Hodja, unaware, continued to walk home, pulling the boy instead of the donkey.

When they reached home, Nasreddin Hodja turned around and saw the boy in place of the donkey.

“Who are you?” he questioned the boy.

“Ahh Efendi,” the scoundrel pretended, “you are not going to believe my story. I was a very naughty boy. I misbehaved all the time and made my mama miserable. When she couldn’t bear it anymore, she put a curse on me and I turned into a donkey. When you thought me good enough to buy, the curse was removed. Thanks to your charity, I became a boy again.’

“I will let you go, but never again torment your mama,” the hodja said, “be a good boy from now on!”

The next day Nasreddin Hodja was in the market again, looking for a new donkey to buy. He saw the donkey he had bought the day before, the one that had turned into a boy. The Hodja went up to it and whispered in its ear, “You naughty boy! You disobeyed your mama again, didn’t you?”