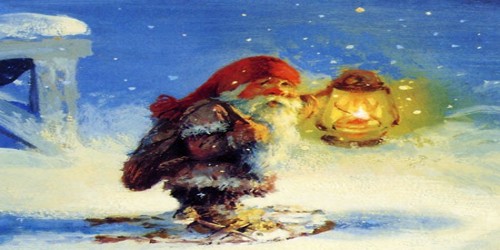 The Nisse and the Christmas Pudding (A Tale From Norway)

Some of you may have seen a Nisse. You would have recognized him if you did, for he’s tiny — only 2 or 3 feet high — and wears a long knit hat and has a long white beard. No one knows what the Nisse look like when they’re young, for people see them only after they’ve grown old.

In fact, if you’ve seen a Nisse, you’ve probably seen him in a barn, hiding in the hay — unless you saw him at Christmastime. That’s when the Nisse usually peeks into houses, for the Nisse adores Christmas pudding.

A Nisse can help his farmer in many ways, so most farmers know that the wise thing to do during the Christmas season is to prepare an extra bowl of steaming pudding for their Nisse. The Nisse likes the thick, creamy kind best, with cinnamon and sugar and raisins. He especially loves it topped with fresh sweetcakes. And if there’s one kind of pudding no Nisse can resist, it’s the golden kind, the kind that once you’ve tasted, you dream about forever.

If a farmer forgets to leave a Nisse his Christmas pudding — well, watch out. Its likely things will go wrong for that forgetful farmer.

Once, long ago, there lived a farmer who owned a big farm with shiny horses, fat pigs, and cows that gave rich milk. Everything went well on his farm for a long time. He was a prosperous, contented man with a happy wife and children. Then one day he decided to spend a few years traveling with his family. He sold his farm, and a new farmer moved in and took over the work.

“Don’t forget to feed the Nisse,” the farmer told the newcomer as he was leaving. The new farmer laughed. “Oh, I won’t,” he said.

On the first evening he lived on the farm, the new farmer was strolling through the barn, talking with his wife. The Nisse was hiding in the corner, waiting to see what his new farmer was like. Suddenly he gasped, for he heard the new owner say to his wife, “That poor old boy told me that whatever I did, I must make sure to take care of the Nisse. Have you ever heard such nonsense? Poor superstitious fellow. There’s no such thing as Nisse or goblins or ghosts. I’m glad I’m not so foolish as he.”

From that moment on, whenever the farmer appeared in the barn, the Nisse made his presence known, dancing about and kicking the hay this way and that. The farmer thought it must be the cats and dogs making a fuss. “Shoo, puss,” he’d cry, or “Scat, dog, go away.”

This made the Nisse anxious, and as Christmastime neared, the Nisse grew more worried still.

“Oh dear, oh dear,” he said to himself, “that farmer doesn’t believe in me. There likely will be no Christmas pudding this year.” He sat down and thought about what he must do. And then he smiled, for he had a plan.

Just a few days before Christmas, the farmer came into the barn and bent down to lift a bale of hay. As he did, something hit him on the neck. He turned quickly but saw nothing at all, and so he bent down again. This time something hit him on the back, and then on the head, and then on the arm and leg and foot and chest — well, all over the place. The farmer hopped about in pain, and that’s when the Nisse showed himself.

“You foolish man. You’d be better off believing in me,” the Nisse cried out, just before he disappeared.

The Nisse was thrilled. “Now he’ll have no doubts about me,” he told himself, and he began to count the days until Christmas. He could almost taste his lovely Christmas pudding.

Alas, Christmas Day came and went, and no Christmas pudding arrived. As the holiday season passed, the Nisse crept round to the farmhouse, peering into the windows. He could see the people feasting and laughing, and all the wonderful food on the table, including the steaming pudding. But no one offered the poor Nisse a thing.

Sure enough, as that year came to an end, the farm began to fail. Soon the cows stopped giving milk, and the horses’ coats grew coarse and dry, and the pigs grew thin. The farmer began to lose money. Month after month, nothing but trouble came to him, no matter how hard he worked.

At last, the poor farmer wrote to the former owner to ask him for help. “Are you caring for the Nisse?” the first farmer asked in his return letter.

Well, you can be sure, then and there, the new farmer decided he must change his ways. He made plans for the coming Christmas. When the time arrived, he remembered to cook up a big bowl of creamy Christmas pudding. He took it to the barn and placed it on a clean white cloth. “Here’s your pudding,” he called to the Nisse, who was hiding nearby, a large grin on his wrinkled face.

And sure enough, before that year’s end, the farm began to prosper again, and soon the farmer was the happiest in the whole valley. You can be sure he never again failed to make the Nisse his Christmas pudding.

Request Letter to Cancel the Approved Leave from Employee