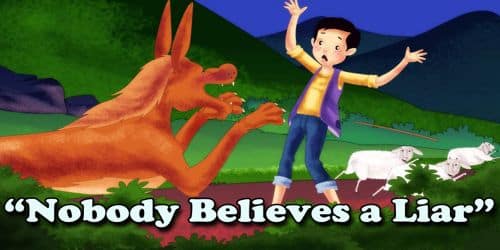 Nobody Believes a Liar

Long, long ago there lived a shepherd boy in a certain village. He used to tend sheep in a nearby field beside the forest. The shepherd boy was a great liar. He enjoyed himself making fun with people. He often cried out “Wolf! Wolff! Come to save me and my sheep”. The kind-hearted villagers heard his cry and rushed to the spot with sticks to save the shepherd boy. But when they came near, they found no wolf and the shepherd boy laughed at them. After a few days, the boy made the same fun. The villagers again ran to the field. But they found no wolf and the boy laughed at them. The villagers became very angry and advised the boy not to make that kind of fun in the future.

But one day a wolf really came. It started to kill the sheep one by one. The shepherd boy was frightened. He shouted and shouted, “Wolf! Wolf! Help! Help!”, But none came to help him. The villagers heard him but thought that the boy was again making fun of them. The wolf killed a number of his sheep. The boy struggled hard to save himself but within a few minutes, the beast killed him.

So, we should never make fun by telling lies.

Moral of the story: ‘Once a liar, always a liar and nobody believes a Liar.’