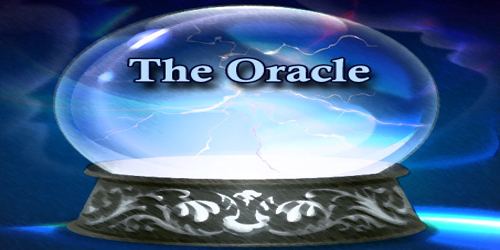 No tram ever goes to Randwick races without him; he is always fat, hairy, and assertive; he is generally one of a party, and takes the center of the stage all the time collects and hands over the fares, adjusts the change, chaffs the conductor, crushes the thin, apologetic stranger next him into a pulp, and talks to the whole compartment as if they had asked for his opinion.

He knows all the trainers and owners or takes care to give the impression that he does. He slowly and pompously hauls out his racebook, and one of his satellites opens the ball by saying, in a deferential way:

The Oracle looks at the book and breathes heavily; no one else ventures to speak.

“Well,” he says, at last, “of course there’s only one in it if he’s wanted. But that’s it will they spin him? I don’t think they will. They’s only a lot of cuddies, anyhow.”

No one likes to expose his own ignorance by asking which horse he refers to as the “only one in it”; and the Oracle goes on to deal out some more wisdom in a loud voice.

“Billy K told me” (he probably hardly knows Billy K by sight) “Billy K told me that that bay horse ran the best mile-and-a-half ever done on Randwick yesterday; but I don’t give him a chance, for all that; that’s the worst of these trainers. They don’t know when their horses are well half of them.”

Then a voice comes from behind him. It is that of the thin man, who is crushed out of sight by the bulk of the Oracle.

“I think,” says the thin man, “that that horse of Flannery’s ought to run well in the Handicap.”

The Oracle can’t stand this sort of thing at all. He gives a snort, wheels half-round and looks at the speaker. Then he turns back to the compartment full of people, and says: “No hope.”

“Who backed him?” says the Oracle.

“In Tattersall’s,” says the thin man.

“I’m sure,” says the Oracle; and the thin man collapses.

On arrival at the course, the Oracle is in great form. Attended by his string of satellites, he plods from stall to stall staring at the horses. Their names are printed in big letters on the stalls, but the Oracle doesn’t let that stop his display of knowledge.

“Ere’s Blue Fire,” he says, stopping at that animal’s stall, and swinging his racebook. “Good old Blue Fire!” he goes on loudly, as a little court collects. “Jimmy B” (mentioning a popular jockey) “told me he couldn’t have lost on Saturday week if he had only been ridden differently. I had a good stake on him, too, that day. Lord, the races that has been chucked away on this horse. They will not ride him right.”

A trainer, who is standing by, civilly interposes. “This isn’t Blue Fire,” he says. “Blue Fire’s out walking about. This is a two-year-old filly that’s in the stall”

“Well, I can see that, can’t I,” says the Oracle, crushingly. “You don’t suppose I thought Blue Fire was a mare, did you?” and he moves off hurriedly.

“Now, look here, you chaps,” he says to his followers at last. “You wait here. I want to go and see a few of the talent, and it doesn’t do to have a crowd with you. There’s Jimmy M over there now” (pointing to a leading trainer). “I’ll get hold of him in a minute. He couldn’t tell me anything with so many about it. Just you wait here.”

He crushes into a crowd that has gathered around the favorite’s stall, and overhears one hard-faced racing man say to another, “What do you like?” to which the other answers, “Well, either this or Royal Scot. I think I’ll put a bit on Royal Scot.” This is enough for the Oracle. He doesn’t know either of the men from Adam or either of the horses from the great original pachyderm, but the information will do to go on with. He rejoins his followers and looks very mysterious.

“Well, did you hear anything?” they say.

The Oracle talks low and confidentially.

“The crowd that have got the favorite tell me they’re not afraid of anything but Royal Scot,” he says. “I think we’d better put a bit on both.”

“What did the Royal Scot crowd say?” asks an admirer deferentially.

“Oh, they’re going to try and win. I saw the stable commissioner, and he told me they were going to put a hundred on him. Of course, you needn’t say I told you because I promised him I wouldn’t tell.” And the satellite beam with admiration of the Oracle and think what a privilege it is to go to the races with such a knowing man.

They contribute their mites to the general fund, some putting in a pound, others half a sovereign and the Oracle takes it into the ring to invest, half on the favorite and half on Royal Scot. He finds that the favorite is at two to one and Royal Scot at threes, eight to one being offered against anything else. As he plows through the ring, a Whisperer (one of those broken-down followers of the turf who get their living in various mysterious ways, but partly by giving “tips” to backers) pulls his sleeve.

“What are you backing?” he says.

“Put a pound on Bendemeer,” says the tipster. “It’s a certainty. Meet me here if it comes off, and I’ll tell you something for the next race. Don’t miss it now. Get on quick!”

The Oracle is humble enough before the hanger-on of the turf. A bookmaker roars “10 to 1 Bendemeer;” he suddenly fishes out a sovereign of his own and he hasn’t money to spare, for all his knowingness and puts it on Bendemeer. His friends’ money he puts on the favorite and Royal Scot as arranged. Then they all go round to watch the race.

The horses are at the post; a distant cluster of crowded animals with little dots of color on their backs. Green, blue, yellow, purple, French grey and old gold, they change about in a bewildering manner, and though the Oracle has a cheap pair of glasses, he can’t make out where Bendemeer has got to. Royal Scot and the favorite he has lost interest in, and secretly hope that they will be left at the post or break their necks, but he does not confide his sentiment to his companions.

They’re off! The long line of colors across the track becomes a shapeless clump and then draws out into a long string. “What’s that in front?” yells someone at the rails. “Oh, that thing of Hart’s,” says someone else. But the Oracle hears them not; he is looking in the mass of color for a purple cap and grey jacket, with black armbands. He cannot see it anywhere, and the confused and confusing mass swings around the turn into the straight.

“No hope!” says the Oracle, with fiendish glee. “Bendemeer! Bendemeer!”

The horses are at the Leger stand now, whips are out, and three horses seem to be nearly abreast; in fact, to the Oracle there seem to be a dozen nearly abreast. Then a big chestnut sticks his head in front of the others, and a small man at the Oracle’s side emits a deafening series of yells right by the Oracle’s ear:

“Go on, Jimmy! Rub it into him! Belt him! It’s a cake-walk! A cake-walk!” The big chestnut, in a dogged sort of way, seems to stick his body clear of his opponents and passes the post a winner by a length. The Oracle doesn’t know what has won, but fumbles with his book. The number on the saddle-cloth catches his eye No. 7; he looks hurriedly down the page. No. 7 Royal Scot. Second is No. 24 Bendemeer. Favorite nowhere.

Hardly has he realized it, before his friends are cheering and clapping him on the back. “By George, Charley, it takes you to pick them.” “Come and have a wet!” “You had a quid in, didn’t you, Charley?” The Oracle feels very sick at having missed the winner, but he dies game. “Yes, rather; I had a quid on,” he says. “And” (here he nerves himself to smile) “I had a saver on the second, too.”

His comrades gasp with astonishment. “Do you hear that, eh? Charley backed first and second. That’s picking them if you like.” They have a wet and pour fulsome adulation on the Oracle when he collects their money.

After the Oracle has collected the winnings for his friends he meets the Whisperer again.

“It didn’t win?” he says to the Whisperer in inquiring tones.

“Didn’t win,” says the Whisperer, who has determined to brazen the matter out. “How could he win? Did you see the way he was ridden? That horse was stiffened just after I have seen you and he never tried a yard. Did you see the way he was pulled and hauled about at the turn? It’d make a man sick. What was the stipendiary stewards doing, I wonder?”

This fills the Oracle with a new idea. All that he remembers of the race at the turn was a jumble of colors, a kaleidoscope of horses and of riders hanging on to the horses’ necks. But it wouldn’t do to admit that he didn’t see everything, and didn’t know everything; so he plunges in boldly.

“Course they ought,” says the Whisperer. “But, look here, put two quid on Tell-tale; you’ll get it all back!”

The Oracle does put on “two quid”, and doesn’t get it all back. Neither does he see any more of this race than he did of the last one, in fact, he cheers wildly when the wrong horse is coming in. But when the public begins to hoot he hoots as loudly as anybody louder if anything; and all the way home in the tram he lays down the law about stiff running and wants to know what the stipendiaries are doing.

If you go into any barber’s shop, you can hear him at it, and he flourishes in suburban railway carriages; but he has a tremendous local reputation, having picked first and second in the handicap, and it would be a bold man who would venture to question the Oracle’s knowledge of racing and of all matters relating to it.