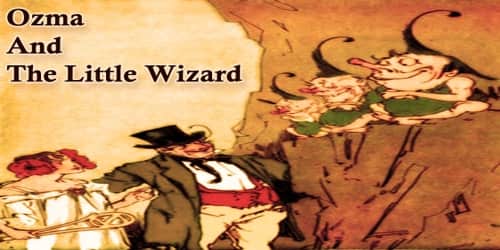 Ozma And The Little Wizard

Once upon a time there lived in the beautiful Emerald City, which lies in the center of the fairy Land of Oz, a lovely girl called Princess Ozma, who was the ruler of all that country. And among those who served this girlish Ruler and lived in a cozy suite of rooms in her splendid palace, was a little, withered old man known as the Wizard of Oz.

This little Wizard could do a good many queer things in magic; but he was a kind man, with merry, twinkling eyes and a sweet smile; so, instead of fearing him because of his magic, everybody loved him.

Now, Ozma was very anxious that all her people who inhabited the pleasant Land of Oz should be happy and contented, and therefore she decided one morning to make a journey to all parts of the country, that she might discover if anything was amiss, or anyone discontented, or if there was any wrong that ought to be righted. She asked the little Wizard to accompany her, and he was glad to go.

“Shall I take my bag of magic tools with me?” he asked.

“Of course,” said Ozma. “We may need a lot of magic before we return, for we are going into strange corners of the land, where we may meet with unknown creatures and dangerous adventures.”

So the Wizard took his bag of magic tools and the two left the Emerald City and wandered over the country for many days, at last reaching a place far up in the mountains which neither of them had ever visited before. Stopping one morning at a cottage, built beside the rocky path which led into a pretty valley beyond, Ozma asked a man:

“Are you happy? Have you any complaint to make of your lot?”

And the man replied:

“We are happy except for three mischievous Imps that live in yonder valley and often come here to annoy us. If your Highness would only drive away those Imps, I and my family would be very happy and very grateful to you.”

“Who are these bad Imps?” inquired the girl Ruler.

“One is named Olite, and one Udent and one Ertinent, and they have no respect for anyone or anything. If strangers pass through the valley, the Imps jeer at them and make horrid faces and call names, and often they push travelers out of the path or throw stones at them. Whenever Imp Olite or Imp Udent or Imp Ertinent come here to bother us, I and my family run into the house and lock all the doors and windows, and we dare not venture out again until the Imps have gone away.”

Princess Ozma was grieved to hear this report and the little Wizard shook his head gravely and said the naughty Imps deserved to be punished. They told the good man they would see what could be done to protect him and at once entered the valley to seek the dwelling place of the three mischievous creatures.

Before long they came upon three caves, hollowed from the rocks, and in front of each cave squatted a queer little dwarf. Ozma and the Wizard paused to examine them and found them well-shaped, strong and lively. They had big round ears, flat noses, and wide grinning mouths, and their jet-black hair came to points on top of their heads, much-resembling horns. Their clothing fitted snugly to their bodies and limbs and the Imps were so small that at first Ozma did not consider them at all dangerous. But one of them suddenly reached out a hand and caught the dress of the Princess, jerking it so sharply that she nearly fell down, and a moment later another Imp pushed the little Wizard so hard that he bumped against Ozma and both unexpectedly sat down upon the ground.

At this, the Imps laughed boisterously and began running around in a circle and kicking dust upon the Royal Princess, who cried in a sharp voice: “Wizard, do your duty!”

The Wizard promptly obeyed. Without rising from the ground he opened his bag, got the tools he required and muttered a magic spell.

Instantly the three Imps became three bushes of a thorny stubby kind with their roots in the ground. As the bushes were at first motionless, perhaps through surprise at their sudden transformation, the Wizard and the Princess found time to rise from the ground and brush the dust off their pretty clothes. Then Ozma turned to the bushes and said:

“The unhappy lot you now endure, my poor Imps, is due entirely to your naughty actions. You can no longer annoy harmless travelers and you must remain ugly bushes, covered with sharp thorns until you repent of your bad ways and promise to be good Imps.”

“They can’t help being good now, your Highness,” said the Wizard who was much pleased with his work, “and the safest plan will be to allow them always to remain bushes.”

But something must have been wrong with the Wizard’s magic, or the creatures had a magic of their own, for no sooner were the words spoken than the bushes began to move. At first they only waved their branches at the girl and little man, but pretty soon they began to slide over the ground, their roots dragging through the earth, and one pushed itself against the Wizard and pricked him so sharply with its thorns that he cried out: “Ouch!” and started to run away.

Ozma followed, for the other bushes were trying to stick their thorns into her legs and one actually got so near her that it tore a great rent in her beautiful dress. The girl Princess could run, however, and she followed the fleeing Wizard until he tumbled headfirst over a log and rolled upon the ground. Then she sprang behind a tree and shouted: “Quick! Transform them into something else.”

The Wizard heard, but he was much confused by his fall. Grabbing from his bag the first magical tool he could find, he transformed the bushes into three white pigs. That astonished the Imps. In the shape of pigs fat, roly-poly and cute they scampered off a little distance and sat down to think about their new condition.

Ozma drew a long breath and coming from behind the tree she said:

“That is much better, Wiz, for such pigs as these must be quite harmless. No one need now fear the mischievous Imps.”

“I intended to transform them into mice,” replied the Wizard, “but in my excitement, I worked the wrong magic. However, unless the horrid creatures behave themselves hereafter, they are liable to be killed and eaten. They would make good chops, sausages or roasts.”

But the Imps were now angry and had no intention of behaving. As Ozma and the little Wizard turned to resume their journey, the three pigs rushed forward, dashed between their legs, and tripped them up, so that both lost their balance and toppled over, clinging to one another. As the Wizard tried to get up he has tripped again and fallen across the back of the third pig, which carried him on a run far down the valley until it dumped the little man in the river. Ozma had been sprawled upon the ground but found she was not hurt, so she picked herself up and ran to the assistance of the Wizard, reaching him just as he was crawling out of the river, gasping for breath and dripping with water. The girl could not help laughing at his woeful appearance. But he had no sooner wiped the wet from his eyes than one of the impish pigs tripped him again and sent him into the river for a second bath. The pigs tried to trip Ozma, too, but she ran around a stump and so managed to keep out of their way.

So the Wizard scrambled out of the water again and picked up a sharp stick to defend himself. Then he mumbled a magic mutter which instantly dried his clothes, after which he hurried to assist Ozma. The pigs were afraid of the sharp stick and kept away from it.

“This won’t do,” said the Princess. “We have accomplished nothing, for the pig Imps would annoy travelers as much as the real Imps. Transform them into something else, Wiz.”

The Wizard took time to think. Then he transformed the white pigs into three blue doves.

“Doves,” said he, “are the most harmless things in the world.”

But scarcely had he spoken when the doves flew at them and tried to peck out their eyes. When they endeavored to shield their eyes with their hands, two of the doves bit the Wizard’s fingers and another caught the pretty pink ear of the Princess in its bill and gave it such a cruel tweak that she cried out in pain and threw her skirt over her head.

“These birds are worse than pigs, Wizard,” she called to her companion. “Nothing is harmless that is animated by impudent anger or impertinent mischief. You must transform the Imps into something that is not alive.”

The Wizard was pretty busy, just then, driving off the birds, but he managed to open his bag of magic and find a charm that instantly transformed the doves into three buttons. As they fell to the ground, he picked them up and smiled with satisfaction. The tin button was Imp Olite, the brass button was Imp Udent and the lead button was Imp Ertinent. These buttons the Wizard placed in a little box which he put in his jacket pocket.

“Now,” said he, “the Imps cannot annoy travelers, for we shall carry them back with us to the Emerald City.”

“But we dare not use the buttons,” said Ozma, smiling once more now that the danger was over.

“Why not?” asked the Wizard. “I intend to sew them upon my coat and watch them carefully. The spirits of the Imps are still in the buttons, and after a time they will repent and be sorry for their naughtiness. Then they will decide to be very good in the future. When they feel that way, the tin button will turn to silver and the brass to gold, while the lead button will become aluminum. I shall then restore them to their proper forms, changing their names to pretty names instead of the ugly ones they used to bear. Thereafter the three Imps will become good citizens of the Land of Oz and I think you will find they will prove faithful subjects of our beloved Princess Ozma.”

“Ah, that is magic well worthwhile,” exclaimed Ozma, well pleased. “There is no doubt, my friend, but that you are a very clever Wizard.”