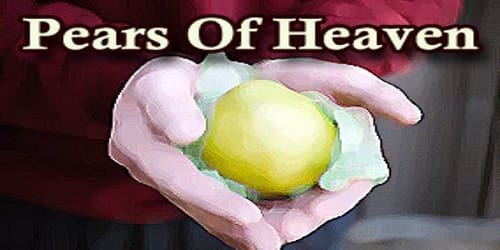 Once upon a time, there lived a farmer who grew beautiful, big pears. He made a good living selling his pears in the market. Over the years, his pears grew juicier and sweeter, and he asked more and more money for them.

Now and then a neighbor or a relative in need would come to him and ask for help. The farmer’s business was blossoming. He had built a large farmhouse. He and his wife had no children of their own, but they had every luxury they could ever need. “Please,” one of his poor friends or neighbors would say, “I could use a little money to tide me through this rough time. Perhaps you can help.”

“I work hard to earn my living,” the farmer would answer. “No sense in giving what I earn away, is there?”

The neighbor or friend would sadly shake his head. “No sense, I suppose.”

“No sense at all,” said the farmer. “If you work hard, you may get lucky, too,” and then he would clap his friend or neighbor on the back and laugh his hearty laugh and raise the price of his pears a penny more. “Everyone loves them. I can sell them for a little more.”

Now one day while he was busy selling in the marketplace, a Taoist priest came along. The priest wore worn and ragged clothes and his face had a weathered look. He was obviously a poor man. “Pardon me,” the priest said, “I wonder if you might give me a pear to eat. I haven’t eaten in many days. Your pears look so delicious.”

“But just one cannot hurt,” said the priest. “You have dozens of pears in your cart.”

“Go away now or I shall call the authorities to take you away,” snapped the farmer.

“But please,” the priest asked once more, and now the farmer lost his temper and screamed at the man. “Get lost! Don’t you understand what I’m saying? I’m saying no. Be gone with you.”

But the priest persisted, and the farmer grew angrier and his voice grew louder. Before long the two men had attracted a crowd.

“What’s going on?” someone asked.

“The greedy farmer will not give a pear to the poor priest,” someone else answered, and soon everyone was arguing and taking sides, and the farmer and the priest were surrounded.

When the market policeman saw what was happening, he reached into his pocket and pulled out a few coins. These he handed to the farmer. “Let me buy the man a pear,” he said. The farmer said, “Of course.” He handed a big juicy pear to the police officer. “You can give it to him,” and so the policeman did.

“Thank you so much,” said the priest, bowing. Then he turned to face the crowd who surrounded him. “Who would like to eat this beautiful pear?” he cried. “I’m giving it away to anyone who wishes to eat a pear.”

Now the crowd was perplexed. “Why don’t you eat the pear yourself, old man? You are starving, aren’t you? Why would you give away the pear?”

“I need only one seed,” he said. “I plan to plant the seed and grow my own pear tree.”

Everyone laughed, with the farmer laughing hardest of all. “What a fool,” he said. “He’ll grow a pear tree, ha!”

While everyone laughed, the priest knelt and with his fingers dug a small hole in the ground. Into this, he popped one pear seed, and then he covered the seed with dirt. “Can anyone give me water?” called the priest. A nearby peddler offered him a pitcher of water, and everyone watched in amazement as he poured the water over the planted seed.

“Is he mad?” people whispered. “What can he be thinking?”

“Now watch,” said the priest. “Watch that spot.” Everyone stared at the spot, including the farmer, and sure enough, soon they saw a stem, and this grew taller and pears began to appear in fact, masses of pears appeared. They were thick and ripe, just like the farmer’s, and the priest began to pluck them one by one. He handed them out to the crowd.

Before long he had given away all the pears that grew on his magical stalk. Then the priest took an ax from beneath his robes and chopped down the stalk. He put it atop his shoulder and walked away.

The farmer watched all this in puzzlement, but once the priest was gone, he wiped his brow and returned to his cart. All his pears were gone. And then he saw that the handlebars on his cart were gone too, and he realized that the priest had tricked him. He had stolen the farmer’s cart handle, and it was this that appeared to be a magical stalk, and all the pears were the farmer’s own pears. He turned quickly to chase the priest, but the man had disappeared, and everyone in the market began to laugh.

“That’s what happens when you become too greedy,” they said, and no one ever saw the priest again.