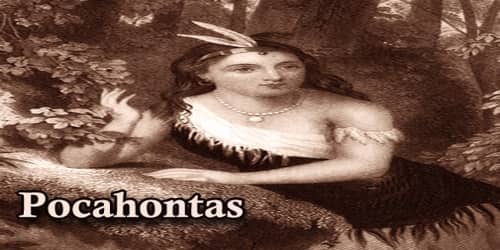 There was once a very brave man whose name was John Smith. He came to this country many years ago, when there were great woods everywhere, and many wild beasts and Indians. Many tales are told of his adventures, some of them true and some of them untrue. The most famous of all these is the following:

One day when Smith was in the woods, some Indians came upon him and made him their prisoner. They led him to their king, and in a short time, they made ready to put him to death.

A large stone was brought in, and Smith was made to lie down with his head on it. Then two tall Indians with big clubs in their hands came forward. The king and all his great men stood around to see. The Indians raised their clubs. In another moment they would fall on Smith’s head.

But just then a little Indian girl rushed in. She was the daughter of the king, and her name was Pocahontas. She ran and threw herself between Smith and the uplifted clubs. She clasped Smith’s head with her arms. She laid her own head upon his.

“O father!” she cried, “spare this man’s life. I am sure he has done you no harm, and we ought to be his friends.”

The men with the clubs could not strike, for they did not want to hurt the child. The king at first did not know what to do. Then he spoke to some of his warriors, and they lifted Smith from the ground. They untied the cords from his wrists and feet and set him free.

The next day the king sent Smith home, and several Indians went with him to protect him from harm.

After that, as long as she lived, Pocahontas was the friend of the white men, and she did a great many things to help them.