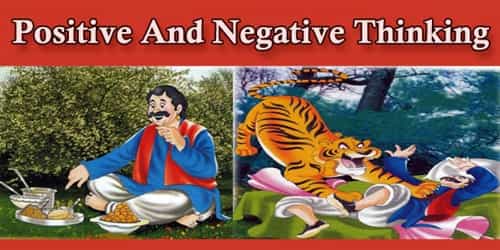 Long ago, there was a trader named Sripad. He amassed huge wealth by his hard work. He had everything in his house.

One day, he set out on a trade journey. When he was passing through a forest, he felt tired and wanted to take rest for some time. He sat under a tree to relax.

While relaxing, he felt thirsty and desired for a glass of Water, ‘If I had some water with which I could quench my thirst right now!’ There was a miracle. No sooner did he wish for water than a pitcher appeared before him. He quenched his thirst and felt relieved.

After some time, he felt hungry and wished for food. He said to himself, ‘If a plate of tasty food is available to me now, I would be really lucky.’

As soon as he thought of it, there appeared a plate of tasty food before him. He ate to his full satisfaction. Too much of food made him drowsy and he murmured, ‘How can I sleep on this rough surface? Why shouldn’t there be a soft bed for me?’ As he uttered these words, a colorful and comfortable bed of velvet appeared before him immediately.

Sripad slept on the bed. He felt as if he was in heaven as his desires were being fulfilled immediately. He was quite unaware that he was sleeping under a tree which can fulfill any desire. It was not an ordinary tree but a Kalpavriksha (a tree thought to have powers to fulfill any desire).

Sripad enjoyed a good sleep on the velvet bed. After he awoke, he began to think, ‘I am all alone in the forest which is full of wild animals like lions, tigers, and wolves who may come at any moment and can kill me. I would not be able to protect myself.’

As he thought so, a ferocious tiger appeared there and attacked Sripad. Poor Sripad was so scared that he could not even run. Thus, he was killed because of his negative thinking.

It is said that a man is always led by his thought. Positive thinking leads to positive results. It anticipates happiness and favorable result from every situation. Hence, we should always be positive.