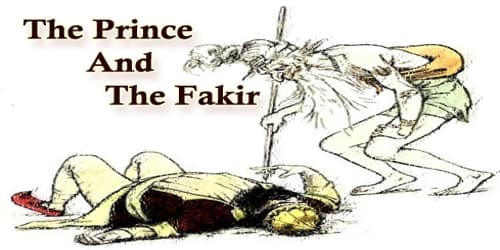 The Prince And The Fakir

Here was once upon a time a King who had no children. Now, this King went and laid him down to rest at a place where four roads met so that everyone who passed had to step over him.

At last a Fakir came along, and he said to the King, “Man, why are you lying here?”

He replied, “Fakir, a thousand men have come and passed by; you pass on too.”

The King replied, “I am a King, Fakir. Of goods and gold, I have no lack, but I have lived long and have no children. So I have come here, and have laid me down at the crossroads. My sins and offenses have been very many, so I have come and am lying here that men may pass over me, and perchance my sins may be forgiven me, and God may be merciful, and I may have a son.”

The Fakir answered him, “Oh King! If you have children, what will you give me?”

“Whatever you ask, Fakir,” answered the King.

The Fakir said, “Of goods and gold I have no lack, but I will say a prayer for you, and you will have two sons; one of those sons will be mine.”

The King took the sweetmeats and put them in his bosom.

Then the Fakir said, “King! In a year I will return, and of the two sons who will be born to you one is mine and one yours.”

Then the Fakir went on his way, and the King came home and gave one sweetmeat to each of his two wives. After some time two sons were born to the King. Then what did the King do but place those two sons in an underground room, which he had built in the earth?

Some time passed, and one day the Fakir appeared, and said, “King! Bring me that son of yours!”

What did the King do but bring two slave-girls’ sons and present them to the Fakir? While the Fakir was sitting there the King’s sons were sitting down below in their cellar eating their food. Just then a hungry ant had carried away a grain of rice from their food and was going along with it to her children. Another stronger ant came up and attacked her in order to get this grain of rice. The first and said, “O ant, why do you drag this away from me? I have long been lame in my feet, and I have got just one grain, and am carrying it to my children. The King’s sons are sitting in the cellar eating their food; you go and fetch a grain from there; why should you take mine from me?” On this, the second ant let go and did not rob the first, but went off to where the King’s sons were eating their food.

On hearing this, the Fakir said, “King! These are not your sons; go and bring those children who are eating their food in the cellar.”

Then the King went and brought his own sons. The Fakir chose the eldest son and took him away, and set off with him on his journey. When he got home he told the King’s son to go out to gather fuel.

So the King’s son went out to gather cow-dung, and when he had collected some he brought it in.

Then the Fakir looked at the King’s son and put on a great pot, and said, “Come round here, my pupil.”

But the King’s son said, “Master first, and pupil after.”

Then the Fakir made a dash at the King’s son, thinking to catch him and throw him into the caldron. There were about a hundred gallons of oil in this caldron, and the fire was burning beneath it. Then the King’s son, lifting the Fakir, gave him a jerk and threw him into the caldron, and he was burnt and became roast meat. He then saw a key of the Fakir’s lying there; he took this key and opened the door of the Fakir’s house. Now many men were locked up in this house; two horses were standing there in a hut of the Fakir’s; two greyhounds were tied up there; two simurgs were imprisoned, and two tigers also stood there. So the King’s son let all the creatures go and took them out of the house, and they all returned thanks to God. Next, he let out all the men who were in prison. He took away with him the two horses, and he took away the two tigers, and he took away the two hounds, and he took away the two simurgs, and with them, he set out for another country.

As he went along the road he saw above him a bald man, grazing a herd of calves, and this bald man called out to him, “Fellow! Can you fight at all?”

The King’s son replied, “When I was little I could fight a bit, and now if anyone wants to fight, I am not so unmanly as to turn my back. Come, I will fight you.”

The bald man said, “If I throw you, you shall be my slave; and if you throw me, I will be your slave.” So they got ready and began to fight, and the King’s son threw him.

He saw that it was a pleasant pool, and thought he would stop and bathe there, and therewith he began to strip off his clothes.

Now the King’s daughter, who was sitting on the roof of the palace, saw his royal marks, and she said, “This man is a king; when I marry, I will marry him and no other.” So she said to her father, “My father; I wish to marry.”

Then the King made a proclamation: “Let all men, great and small; attend to-day in the hall of audience, for the King’s daughter will to-day take a husband.”

All the men of the land assembled, and the traveler Prince also came, dressed in the Fakir’s clothes, saying to himself, “I must see this ceremony today.” He went in and sat down.

The King’s daughter came out and sat in the balcony, and cast her glance around all the assembly. She noticed that the traveler Prince was sitting in the assembly in Fakir’s attire.

The Princess said to her handmaiden, “Take this dish of henna, go to that traveler dressed like a Fakir, and sprinkle scent on him from the dish.”

The handmaiden obeyed the Princess’s order, went to him, and sprinkled the scent over him.

Then the people said, “The slave-girl has made a mistake.”

But she replied, “The slave-girl has made no mistake, her mistress has made the mistake.”

On this, the King married his daughter to the Fakir, who was really no Fakir, but a Prince.

What fate had decreed came to pass in that country, and they were married. But the King of that city became very sad in his heart, because when so many chiefs and nobles were sitting there his daughter had chosen none of them, but had chosen that Fakir; but he kept these thoughts concealed in his heart.

One day the traveler Prince said, “Let all the King’s sons-in-law come out with me to-day to hunt.”

People said, “What is this Fakir that he should go a-hunting?”

However, they all set out for the hunt, and fixed their meeting-place at a certain pool.

The newly married Prince went to his tigers, and told his tigers and hounds to kill and bring in a great number of gazelles and hog-deer and markhor. Instantly they killed and brought in a great number. Then taking with him these spoils of the chase, the Prince came to the pool settled on as a meeting-place. The other Princes, sons-in-law of the King of that city, also assembled there; but they had brought in no game, and the new Prince had brought a great deal. Thence they returned home to the town, and went to the King their father-in-law, to present their game.

Now that King had no son. Then the new Prince told him that in fact he, too, was a Prince. At this, the King, his father-in-law, was greatly delighted and took him by the hand and embraced him. He seated him by himself, saying, “O Prince, I return thanks that you have come here and become my son-in-law; I am very happy at this, and I make over my kingdom to you.”