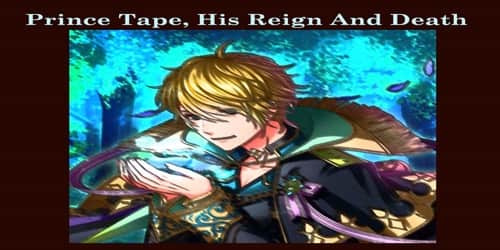 Prince Tape, His Reign And Death

Once, long ago and far away, in a country whose name was never seen upon any map, there lived a prince who ruled with absolute sway over his subjects, none of whom presumed to question his authority, or ventured to intercede for mercy in judgment. Absolute individual power is not the wisest form of government for ordinary mortals, but it’s being Prince Tape’s right by birth he felt that it was perfectly lawful for him to exercise it. So, by degrees, he became more and more tyrannical, and when he had brought all his human and animal subjects under perfect control, he brought his magical power to bear upon the birds of the air, the fishes of the sea, and even the trees, grasses, winds and waters. You see, he could not be satisfied. All these were commanded to acknowledge his presence by profound obeisance; the birds to dart swiftly before him, the trees and grasses to bow low, the fishes to form in double line through which his vessel was rowed, and the winds to sigh or loudly roar, as his mood or temper demanded. It would seem that Prince Tape had everything so that he was master over all things. But there is always power behind a power, although we cannot see it, and there never was a good man but that there was a better one, so there never was a tyrant but that there was a greater one. All things have their allotted time and sphere, especially bad ones.

Our humblest servant might, on an opportunity, become our sternest master. None of these ideas seemed to have entered Prince Tape’s mind, and perhaps if they had he would have scorned them. But Prince Tape’s despotic plans were not his own; they entered his mind from somewhere, just as the air we breathe is not of our own creating but comes from a boundless source. So the despotism of Prince Tape came by the prompting of Prince Evil, who was trying to see how many stern things he could urge him to perform. By and by Prince Evil, who was invisible to the eyes of mortals, felt an intense desire to persecute Prince Tape, as that tyrant had treated others, and when Prince Evil has a design, he is strong enough to carry it out if, as in Prince Tape’s case, he had no claim for assistance or mercy.

So Prince Evil began a warfare from his higher seat of power, and soon Prince Tape was put to flight from his strong castle and sought to hide himself, but, so accustomed had been his subjects to do him reverence, with no thought that he could be dethroned, that in his efforts to escape they pointed the way of his flight instead of concealing it.

His human subjects prostrated themselves before him; the animals, tame and wild, turned their heads to look which way he had gone; birds darted before him; trees and grasses bowed low as before, and when at length he leaped into the deep waters to escape his great enemy, the beautiful fishes circled around him, the waves leaped and foamed, and the winds roared. Then the spirit of evil, whose home was in the black clouds above him, threw lances of lightning that pierced him to the death. Thus you see the tyranny he had exercised became his own executioner.