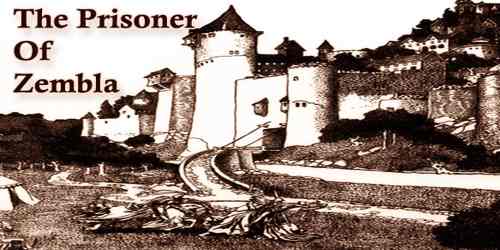 The Prisoner Of Zembla

So the king fell into a furious rage, so that none durst go near him for fear, and he gave out that since the Princess Ostla had disobeyed him there would be a great tourney, and to the knight who should prove himself of the greatest valor he would give the hand of the princess.

And he sent forth a herald to proclaim that he would do this.

And the herald went about the country making his desire known, blowing a great tin horn and riding a noble steed that pranced and gambolled; and the villagers gazed upon him and said: “Lo, that is one of them tin horn gamblers concerning which the chroniclers have told us.”

And when the day came, the king sat in the grandstand, holding the gage of battle in his band, and by his side sat the Princess Ostla, looking very pale and beautiful, but with mournful eyes from which she scarce could keep the tears. And the knights which came to the tourney gazed upon the princess in wonder at her beauty, and each swore to win so that he could marry her and board with the king.

Suddenly the heart of the princess gave a great bound, for she saw among the knights one of the poor students with whom she had been in love.

The knights mounted and rode in a line past the grandstand, and the king stopped the poor student, who had the worst horse and the poorest caparisons of any of the knights and said:

“Sir Knight, prithee tell me of what that marvelous shacky and rusty-looking armor of thine is made?”

“Oh, king,” said the young knight, “seeing that we are about to engage in a big fight, I would call it to scrap iron, wouldn’t you?”

About this time the Princess Ostla, who began to feel better at the sight of her lover, slipped a piece of gum into her mouth and closed her teeth upon it, and even smiled a little and showed the beautiful pearls with which her mouth was set.

Whereupon, as soon as the knights perceived this, 217 of them went over to the king’s treasurer and settled for their horse feed and went home.

“It seems very hard,” said the princess, “that I cannot marry when I chews.”

But two of the knights were left, one of them being the princess’ lover.

“Here’s enough for a fight, anyhow,” said the king. “Come hither, O knights, will ye joust for the hand of this fair lady?”

“We joust will,” said the knights.

The two knights fought for two hours, and at length the princess’ lover prevailed and stretched the other upon the ground. The victorious knight made his horse caracole before the king, and bowed low in his saddle.

On the Princess Ostla’s cheeks was a rosy flush; in her eyes the light of excitement vied with the soft glow of love; her lips were parted, her lovely hair unbound, and she grasped the arms of her chair and leaned forward with heaving bosom and happy smile to hear the words of her lover.

“You have foughten well, sir knight,” said the king. “And if there is any boon you crave you have but to name it.”

“Then,” said the knight, “I will ask you this: I have bought the patent rights in your kingdom for Schneider’s celebrated monkey wrench, and I want a letter from you endorsing it.”

“You shall have it,” said the king, “but I must tell you that there is not a monkey in my kingdom.”

With a yell of rage, the victorious knight threw himself on his horse and rode away at a furious gallop.

The king was about to speak when a horrible suspicion flashed upon him and he fell dead upon the grandstand.

“My God!” he cried. “He has forgotten to take the princess with him!”