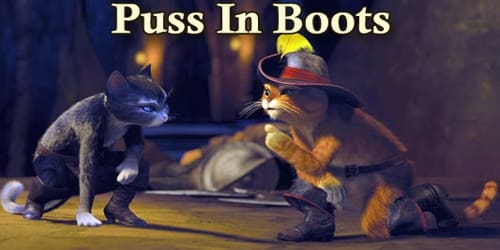 There was a miller who had three sons, and when he died he divided what he possessed among them in the following manner: He gave his mill to the eldest, his ass to the second, and his cat to the youngest. Each of the brothers accordingly took what belonged to him, without the help of an attorney, who would soon have brought their little fortune to nothing, in law expenses.

The poor young fellow who had nothing but the cat, complained that he was hardly used: “My brothers,” said he, “by joining their stocks together, may do well in the world, but for me, when I have eaten my cat and made a fur cap of his skin, I may soon die of hunger!” The cat, who all this time sat listening just inside the door of a cupboard, now ventured to come out and addressed him as follows: “Do not thus afflict yourself, my good master. You have only to give me a bag, and get a pair of boots made for me, so that I may scamper through the dirt and the brambles, and you shall see that you are not so ill provided for as you imagine.”

Though the cat’s master did not much depend upon these promises, yet, as he had often observed the cunning tricks puss used to catch the rats and mice, such as hanging upon his hind legs and hiding in the meal to make believe that he was dead, he did not entirely despair of his being of some use to him in his unhappy condition.

When the cat had obtained what he asked for, he gayly began to equip himself: he drew on his boots; and putting the bag about his neck, he took hold of the strings with his forepaws, and bidding his master take courage, immediately sallied forth. The first attempt Puss made was to go into a warren in which there were a great number of rabbits. He put some bran and some parsley into his bag; and then stretching himself out at full length as if he was dead, he waited for some young rabbits, who as yet knew nothing of the cunning tricks of the world, to come and get into the bag, the better to feast upon the dainties he had put into it. Scarcely had he lain down before he succeeded as well as could be wished. A giddy young rabbit crept into the bag, and the cat immediately drew the strings and killed him without mercy. Puss, proud of his prey, hastened directly to the palace, where he asked to speak to the king.

On being shown into the apartment of his majesty, he made a low bow, and said, “I have brought you, sire, this rabbit from the warren of my lord the Marquis of Carabas, who commanded me to present it to your majesty with the assurance of his respect.” “Tell my lord marquis of Carabas,” replied the king, “that I accept of his present with pleasure, and that I am greatly obliged to him.” Soon after, the cat laid himself down in the same manner in a field of corn, and had as much good fortune as before; for two fine partridges got into his bag, which he immediately killed and carried to the palace: the king received them as he had done the rabbit, and ordered his servants to give the messenger something to drink. In this manner, he continued to carry presents of the game to the king from my lord marquis of Carabas, once at least in every week.

One day, the cat having heard that the king intended to take a ride that morning by the river’s side with his daughter, who was the most beautiful princess in the world, he said to his master: “If you will but follow my advice, your fortune is made. Take off your clothes, and bathe yourself in the river, just in the place I shall show you, and leave the rest to me,” The marquis of Carabas did exactly as he was desired, without being able to guess at what the cat intended. While he was bathing the king passed by, and puss directly called out as loud as he could bawl: “Help! Help! My lord Marquis of Carabas is in danger of being drowned!”

The king hearing the cries put his head out at the window of his carriage to see what the matter was: when, perceiving the very cat who had brought him so many presents, he ordered his attendants to go directly to the assistance of my lord marquis of Carabas. While they were employed in taking the marquis out of the river, the cat ran to the king’s carriage, and told his majesty, that while his master was bathing, some thieves had run off with his clothes as they lay by the river’s side; the cunning cat all the time having hidden them under a large stone.

The king hearing this commanded the officers of his wardrobe to fetch one of the most handsome suits it contained, and present it to my lord marquis of Carabas, at the same time loading him with a thousand attentions. As the fine clothes they brought him made him look like a gentleman, and set off his person, which was very comely, to the greatest advantage, the king’s daughter was mightily taken with his appearance, and the marquis of Carabas had no sooner cast upon her two or three respectful glances, then she became violently in love with him.

The king accordingly passed a moment after, and inquired to whom the corn he saw belonged? “To my lord marquis of Carabas,” answered they very glibly; upon which the king again complimented the marquis upon his noble possessions. The cat still continued to go before and gave the same charge to all the people he met with; so that the king was greatly astonished at the splendid fortune of my lord marquis of Carabas.

Puss at length arrived at a stately castle, which belonged to an Ogre, the richest ever known; for all the lands the king had passed through and admired were his. The cat took care to learn every particular about the Ogre, and what he could do, and then asked to speak with him, saying, as he entered the room in which he was, that he could not pass so near his castle without doing himself the honor to inquire after his health. The Ogre received him as civilly as an Ogre could do, and desired him to be seated, “I have been informed,” said the Cat, “that you have the gift of changing yourself to all sorts of animals; into a lion or an elephant for example.” “It is very true,” replied the Ogre somewhat sternly; “and to convince you I will directly take the form of a lion.” The cat was so much terrified at finding himself so near to a lion, that he sprang from him, and climbed to the roof of the house; but not without much difficulty, as his boots were not very fit to walk upon the tiles.

Some minutes after, the cat perceiving that the Ogre had quitted the form of a lion, ventured to come down from the tiles, and owned that he had been a good deal frightened, “I have been further informed,” continued the cat, “but I know not how to believe it, that you have the power of taking the form of the smallest animals also; for example of changing yourself to a rat or a mouse: I confess I should think this impossible.” “Impossible! You shall see;” and at the same instant, he changed himself into a mouse and began to frisk about the room. The cat no sooner cast his eyes upon the Ogre in this form, than he sprang upon him and devoured him in an instant. In the meantime, the king, admiring as he came near it, the magnificent castle of the Ogre, ordered his attendants to drive up to the gates, as he wished to take a nearer view of it. The cat, hearing the noise of the carriage on the drawbridge, immediately came out, saying: “Your majesty is welcome to the castle of my lord marquis of Carabas.” “And is this splendid castle yours also, my lord marquis of Carabas? I never saw anything more stately than the building, or more beautiful than the park and pleasure grounds around it; no doubt the castle is no less magnificent within than without pray, my lord marquis, indulge me with a sight of it.”

The marquis gave his hand to the young princess as she alighted, and followed the king who went before; they entered a spacious hall, where they found a splendid collation which the Ogre had prepared for some friends he had that day expected to visit him; but who, hearing that the king with the princess and a great gentleman of the court were within, had not dared to enter.

The king was so much charmed with the amiable qualities and noble fortune of the marquis of Carabas, and the young princess too had fallen so violently in love with him, that when the king had partaken of the collation, and drunk a few glasses of wine, he said to the marquis: “It will be your own fault, my lord marquis of Carabas, if you do not soon become my son-in-law.” The marquis received the intelligence with a thousand respectful acknowledgments, accepted the honor conferred upon him, and married the princess that very day. The cat became a great lord, and never after ran after rats and mice but for his amusement.