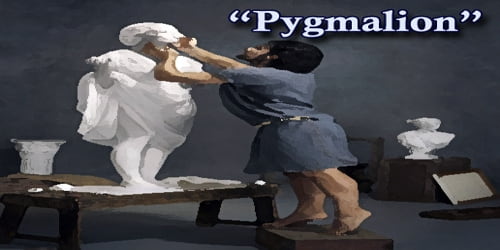 Many centuries ago, a man called Pygmalion lived and worked in Cyprus. He was a sculptor and he used to carve statues of the gods and demigods who frequented the island. He had the greatest skill. Those who admired his work said that his statues almost lived and breathed, they were so lifelike.

Pygmalion had some eccentricities. Not least, he avoided women so far as he could. Life, he considered, should be dedicated to art, not women. If he was going to put anybody or anything on a pedestal, it would be a statue.

Of course, he could not avoid the female sex altogether. Often women would come into his studio to choose one of his miniature statues of the gods or goddesses. Many people had shrines at home, where they said their prayers to the gods. Shrines needed statues. Occasionally he would find that his eyes were lingering on one of those female forms. He would watch her examine the work of his hands with her gently slanting brown eyes, run her slender fingers over his smooth carvings, perhaps blush at his effigies of satyrs, which were rather rude sometimes. And he could not help wondering at her wavy auburn hair, and the mysterious feline way that she moved, and her soft lips and.. oh.. well it was annoying, and he certainly did not tell anybody else about these feelings.

One night, as the sculptor lay asleep, Aphrodite herself appeared to him.

“Listen now Pygmalion,” she said, ticking him off. “You are dishonoring me by refusing to love a woman. There are several nice young girls in the village. You must pick one for your wife, and if you don’t, I will choose one for you!”

Poor Pygmalion. The goddess was ordering him to marry. This was not so much a dream, as a nightmare! Fortunately, a cunning plan occurred to him.

“Oh goddess, please,” he begged. “Before I marry I must create my greatest work. Give me time to create a statue in your likeness. It will be the most lovely lifelike statue ever made and will do you the greatest honor. I cannot do this when I am married, for my wife will be jealous of its great beauty.”

Aphrodite was famously open to flattery and she smiled at his suggestion. “All right then,” she agreed. “I shall give you a stay of execution. You may have time to make a statue of me before you marry. I look forward to seeing it.”

In the morning, Pygmalion went down to the port and spoke to a merchant. He ordered the finest ivory from Africa. He knew that it would take several months to arrive. When it did come, he started to make small statues of the goddess, trying them out in different poses. When Aphrodite appeared to him in a dream to complain about the delay, he replied that art cannot be rushed.

A year went by, and Pygmalion ran out of excuses. He began to work on the life-sized statue for real. He made her perfect. Her ivory surface was as white as snow. She had more beauty, in an unblemished sort of way, than any real girl could have. And yet, she was so real, she seemed at first glance to be living. He painted her eyes blue, and you could see daylight in them. You could fancy that the breeze was playing in her wavy hair. Her lips were just slightly parted. She seemed just about to move only she stayed quite still. The sculptor marveled at his wonderful creation. He held her hand. Was she really ivory, and not flesh and blood? She was so real; she could not be ivory surely? But he knew that she was.

After all, he had made her. He kissed her, and it seemed that she returned his kiss. He spoke to her, and it was as if he could hear her beautiful, wise and witty thoughts. He told her many times how lovely she was. When he went out for walks, she was always on his mind, and he searched for presents for her. Smooth pebbles, winding shells, and wildflowers. His delicate hands made jewelry for her out of silver and amber. He slipped a ring on her finger. He draped her in lovely dresses. He even brought her a little pet bird for the company while he was away. He lay her down on the bed with a soft pillow for her head. When he spoke to her, he gave her a name, Galatea. Of course, Aphrodite saw all of this, and she laughed at the sculptor who scorned all women and who yet, had fallen in love with one, or the idea of one, sprung from his own imagination and craft.

“Yes,” she thought. “My power is greater than that of all the gods and goddesses.”

It was the holiday of Aphrodite. People were dancing and singing in the streets. Incense burnt on the altar of love in the temple. Pygmalion kneeled down and prayed:

“Oh, Mighty Aphrodite! I have chosen the girl I wish to marry. She is my sculpture. Please bring her to life, for I can love no other.”

Aphrodite saw that the heart of Pygmalion had changed. She knew that he had done her a great honor by falling in love. She made the flame on the alter leap and dance for joy. Pygmalion understood that she had granted his greatest wish, and he rushed home. He found the statue, standing quite still as she always did. There were tears of disappointment in his eyes. He held her darling hand and stroked her slender arm.

Gradually he felt her skin soften, as wax softens in the sunshine. She began to turn from snow white to slightly pink. There was warmth in her body. Gradually she leaned her head back, and her hair fell down loosely over her shoulders. Her eyes moved. Her mouth opened. The statue of Pygmalion was alive!

Pygmalion married Galatea and he soon discovered that she was not actually perfect because no living person is. Only a statue or a figment of the imagination can attain perfection. But she was lovely, and that was more than enough. They lived very happily together. A year later, a lovely baby was born to the sculptor and his wife. They called him Paphos, and as time went by, the place on the island where Aphrodite was born was named after him.