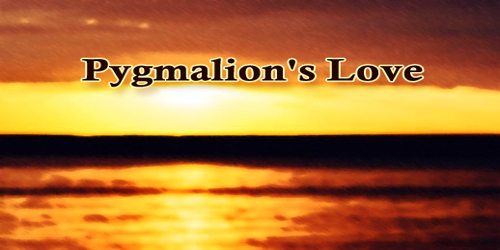 Long ago there lived a sculptor named Pygmalion. He was a fine craftsman and artist who devoted most of his days and nights to his work. He seldom spent time among people, for he liked his solitary life, and when he was not carving statues, he read poetry and stories and sang songs. He especially loved the tales of the gods. He was a dreamy man, and though he was not unkind, many in his village called him sullen. “He’s too distant from people,” they muttered, and they often gossiped about him.

Perhaps he was a bit sullen, but Pygmalion also dreamed of finding love one day, love like the great loves of the gods.

One warm spring day, Pygmalion sat in his courtyard beneath a bright blue sky. Listening to the songbirds and to the rustle of the wind in the trees, he pondered his next work of art, and suddenly he was seized by inspiration and knew what he must do. Brimming with excitement, he dashed to his storage area, where he reached for his latest purchase.

It was a huge piece of ivory, a tusk that was almost as tall as he. Pygmalion had purchased it from a passing traveler. When he looked at it, his heart swelled at its beauty, and he carried the ivory into his studio and set to work.

Now Pygmalion worked, carving from the tusk the figure of a woman, the very image, or so he imagined, of pure, true love. He worked with a gentle touch, for as he worked, he recalled poetry and tales of romance and the beauty of the world around him. Beneath his fingers the figure that emerged was lovely indeed. He worked day and night until each curl of her hair was perfect, until her face was the face of a goddess.

But Pygmalion, normally a quiet man, was not silent as he worked. He spoke to his sculpture. He told her tales of romance and heroes. He told his sculpture everything he knew of the natural world, of bird songs and sea sounds, of the stars and seasons. Before long he knew this was the woman he would always love, this ivory figure whom he had created with such love and pleasure.

He had never felt so full of joy.

When she was complete, he looked at her and knew that he had made something magnificent, and loved her even more. He told her stories of the gods and of Mount Olympus. He picked bouquets of flowers and lay these at her feet. He wept and laughed with her, he played music for her, and he promised he would always love her.

Sometimes passers-by would peer over the courtyard walls and watch and listen. “How crazy he is,” they would whisper. “Who would love a piece of ivory?” “What a waste his tales are,” others laughed. “Who cares about the stories of the gods?” still others said.

But Pygmalion was the kindest of lovers. Each morsel of food he ate, he described to his beloved statue, and when he smelled the scent of flowers in the evening air, he told her of these, too. He became more joyful and more peaceful, too, and now all the work he did was filled with new life. Each piece he completed, he brought to his beloved statue, and he shared the stories of his work, of his errors and his successes. In the morning he walked at once to her side and sat beside her, sharing his dreams and plans.

One day, just as the sun began to rise, Pygmalion woke and smiled. He had dreamed that his sculpture was alive, and in many ways he knew she was, for he felt her presence always. He stretched and rose, eager to share this dream with her.

This morning, like other mornings, he reached out to touch his beloved, to feel the cool ivory beneath his palms, to offer his warmth, and when he did, his eyes opened wide. “I’m still dreaming,” he whispered, for he had felt a pulse. He felt again, almost afraid, and touched his statue’s face, and as he did, her face, once still and firm, softened, the carved mouth moved into a smile, and her eyes began to gleam. She had bloomed into a real human being.

Pygmalion gasped as his statue stepped down from her pedestal and embraced her creator, her friend, her companion.

“You have given me life,” she whispered. “Your stories and your love were so strong, they have brought me life.”

And that day, when the passers-by peered over the garden walls, they stared in astonishment, for there in the courtyard where once a statue had stood; they saw a beautiful woman, with blooming cheeks and a voice as sweet as any songbird’s. Man and woman sat together, laughing and talking.

For many days, no one believed the stories they heard of the statue who had come to life, but before long everyone knew that it was true, for Pygmalion and his beloved lived happily together, and they went into the world together. And Pygmalion’s beloved was so beautiful and kind, everyone soon loved her almost as much as her creator loved her.