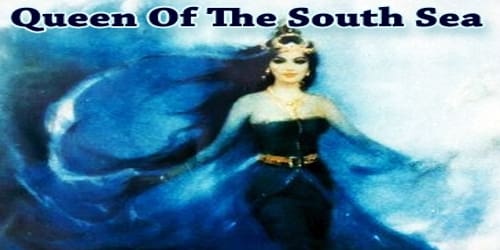 Queen Of The South Sea

Long ago, a great flood swamped the Indonesian island known as Sumatra. The wind howled and towering waves crashed upon the shores. Crops and cattle were washed out to sea; bamboo huts blew away; rice paddies flooded. The storm raged on, and the people prayed for peace to the Queen of the South Sea.

When at last the winds died and the sea grew calm, the people gathered what remained of their belongings. They looked around at the muddy rice paddies and wondered how to begin again. They built tiny huts for shelter and began the search for food.

“Birds have nested in the caves in the sea cliffs,” an old man said. “We can climb to the caves and hunt for eggs,” others cried.

The men prepared to journey to the caves, and their wives began to fret because of the danger. “The Queen of the South Sea might try to destroy you,” they said nervously, but there was nothing else to be done, and so the families prepared ladders of rope so the men could climb down the steep cliffs to the caves.

One man who lived in Padang had lost everything. He looked around at the muddy fields that had once been his farmland. “We must gather the little rice we have,” he said to his wife. “Yes,” she agreed. “We must make an offering to the queen.” She gathered all the rice they had and placed it inside two coconut shells.

“Save a little for the children,” her husband said, “but I need nothing to eat. I will take the rest as an offering to the queen.”

Carrying the shells, the man from Padang set off for the cliffs. On his way, he met a man from Pakanbaru who carried a basket full of chicken, rice, and bananas. He was a wealthy man and had lost very little in the flood.

The man from Pakanbaru laughed at the poor fellow from Padang. “Your offering is very small,” he said as he reached into his basket and pulled out a chicken leg. He began to eat. “The Queen of the South Sea will be displeased,” he said between bites and laughed again as he ate a chicken wing, tossing the bones back into his basket.

The man from Padang was worried, but he knew he must go on, as he hoped to find some food for his family.

By the time the men arrived at the cliffs, the basket of the man from Pakanbaru was filled only with chicken bones, banana skins and a few grains of rice. The men from Padang’s coconut shells were full, for he had eaten nothing.

The two men set their offerings upon their mats at the top of a cliff and bowed to the Queen of the South Sea. “I offer you the humblest gift,” the man from Padang said. “Forgive me, but this is all I have.”

The man from Pakanbaru laid his basket of bones and banana skins upon his mat and said nothing.

Both men began to climb down the face of the cliff.

The man from Padang reached a cave and climbed inside. Adjusting his eyes to the darkness, he searched in vain for birds’ nests. As he turned to leave, he saw a dozen oysters lying on a large rock. “I will make these for my children,” he said aloud, “and pray these will fill their small stomachs.”

“Take them with my blessing,” a voice called. “You and your wife have given generously.” The man turned but saw no one. He knew this must be the voice of the queen, for he heard the wind is rising and the sea pounding. He quickly gathered the oysters, clutched the rope ladder and climbed to the top of the cliff.

Meanwhile, his wife at home prayed to the queen. “Send my husband home safely,” she prayed. “We will be fine as long as he returns to us.”

The wife of the man from Pakanbaru also prayed in her home. “Queen,” she cried, “give us a fortune from the caves as great as our offering.”

The man from Pakanbaru had climbed inside a cave, but he was so full from his meal, he fell asleep. He did not hear the sound of the wind rising, but was roused from his slumber by a crashing wave that spilled into the cave. As he reached for the rope at the cave’s entrance, a thundering voice cried, “Why did you leave me only bones and skins?”

The man from Pakanbaru shivered with fear. “Pity me!” he cried. “Save me for the sake of my wife!”

The Queen of the South Sea roared again. “I shall give your wife all she prays for,” she said, and with a flash of lightning, the rope ladder floated toward him. He grabbed it and pulled himself to the top of the cliff.

Both men hurried home. The man from Pakanbaru had just reached his village when his wife came running towards him. “Husband,” she wept, “while you were away, our house burned to the ground.”

The man from Pakanbaru knew at once that his own greed had brought his misfortune. His house was now in ruins, just like the gift he had left for the queen.

Meanwhile, in Padang, the man opened his oysters to feed his children. To his amazement, he found a beautiful, shimmering pearl inside each one, and when he sold the pearls at the market, he was able to buy land and plants. The man from Padang became as prosperous as his heart was generous.