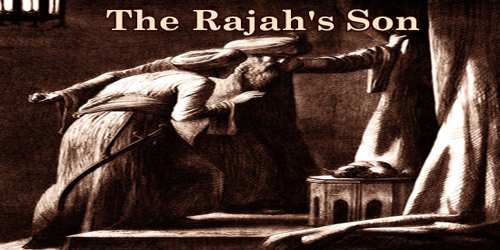 Long ago a rajah and his wife had one son. They adored him and surrounded him with every comfort. They hoped he would stay with them forever, for they wished always to protect him from the woes and difficulties in the world beyond their palace walls.

As the prince grew older, he became curious about the outside world. One day he ventured into the nearby forest, and as he walked beneath the trees, he looked up and saw dozens of parrots. Some flew in the branches above him, some perched at his feet, and others fluttered in the air around his head.

The prince knew that he must venture out into the world.

When he told his parents he was leaving, they pleaded with him not to go. “There are dangers in the forest,” his mother wept. “There’s no need to leave your life here. Do not leave those who love you.”

“I will always love you,” the prince said, “but I must learn to love others, too. The world calls me.”

At dawn the prince set off. He rode for hours, and when the sun began to set, he sat down to eat. Alas, when he opened the bag, he found hundreds of ants swarming around the savory delicacies his mother had packed for him. But the prince was a good-natured fellow. “Never mind,” he said, “the ants need food, too. They seem hungry.”

The moment he spoke, the Ant King climbed upon his hand and bowed. “Thank you for your kindness, good prince. If ever you are in need, call for us, and we will help you just as you have helped us.”

The prince settled down for the night. In the morning he set out again, but suddenly he heard a fierce roar, and when he rounded a corner, he saw a tiger in his path.

“Why do you roar?” asked the prince.

“I have a thorn in my foot that hurts me terribly.”

“I’ll fix that,” the prince said, and without a thought for his safety, he jumped from his horse and took out his knife. With this he cut out the deep thorn.

The tiger sighed. “Prince, if you are ever in trouble, call for me, and I will come to you.”

The prince rode deeper into the forest. Soon he came upon two thieves fighting over a tiny bed.

“Why do you fight?” the prince asked.

“This bed will take us wherever we want to go,” the first thief said. “And it’s mine. It’s mine!”

“I’ll solve your problem,” said the prince. “I’ll shoot two arrows, and whichever one of you returns first with his arrow will win the bed.” With that he shot two arrows deep into the forest, and the thieves ran to fetch them.

The moment they were out of sight, the prince gathered up the bed and galloped away. He rode well into the evening.

Suddenly, in the distance, the prince spied a princess sitting atop the roof of a palace. So beautiful was she, she lighted up the evening as if it were day. But the prince could see that she was weeping. He dismounted his horse and held the tiny bed between his hands.

“Take me to the princess, now,” he said, and a moment later he was there, upon the palace rooftop beside the princess.

All night long the prince and princess talked, sharing the stories of their lives. By dawn they knew they were in love. Alas, the princess was engaged to her father’s adviser. “But I do not love him,” she told the prince, “and that is why I weep. I do not want to marry a man I don’t love.”

She ran to her father and begged him to allow her to marry the prince.

“He will have to prove himself,” said the king, rubbing his hands together. He wanted to be rid of this intruder.

“Tonight,” said the king, “you must crush 500 pounds of mustard seed. Bring me the oil by morning, or I shall send you away, and you will never again see my daughter.”

The prince, left alone in a room with the pounds and pounds of mustard seed, closed his eyes and called to his friends. “Dear ants, I need you.” Soon the ants appeared and worked through the night, crushing all the mustard seed.

In the morning, when the king saw the oil, he was amazed. “That is fine,” he said, “but now you must get rid of the demons who haunt our land.”

And so the prince closed his eyes and called to the tiger, who came leaping and roaring, bringing with him all his friends. Before long the tigers had chased away all the demons.

When the king saw that his land was free of the demons, he looked closely at the prince. “It seems you truly love my daughter,” he said.

“And I see you and my daughter are determined to marry. Your determination and friendship have brought you much luck. I will bless your marriage.”

And so the prince and princess married, and they lived in great happiness. And they were loyal to each other and to all those whom they loved.