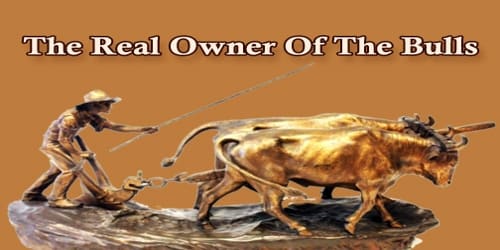 The Real Owner Of The Bulls

Once a farmer purchased two healthy oxen from a fair. He reached home very late but was very happy to have those good oxen. Now, he no longer has to depend on others for cultivating his fields. He decided to take good care of the oxen. He was also thinking of making money by lending them to others.

The next day, he left early in the morning with his oxen and plowed the field. At noon, he left the animals loose for grazing and slept for a while under a tree to refresh himself.

A thief passing by saw a pair of oxen and the owner sleeping. He thought, ‘I shouldn’t miss this opportunity of stealing them. As soon as he roped them and proceeded, the farmer got up and saw the thief taking away his oxen. The farmer ran after the thief and caught him by his neck.

The farmer said, “Who are you? How dare you steal my oxen!” The thief said, “What nonsense! These are my oxen. I bought them yesterday from the fair.”

The farmer got annoyed and said, “Do not try to befool me. These are mine.” They continued to fight like this.

The farmer dragged the thief to a nearby village. He put his claim over the oxen but the thief also made a counterclaim.

The villagers asked both of them to bring witnesses to support their claim. The farmer showed his inability as he had brought the oxen only yesterday. His villagers had not seen the oxen hence they could not recognize them. The thief, too, failed to bring a witness. The dispute remained unsolved.

The thief said, “See! This fellow has no proof and was just trying to befool us all.” At this stage, all the villagers decided to take the case to the village physician who was very intelligent.

The village physician heard both of them. He understood who the real owner was. Even then he wanted to make the case candid. Therefore, he asked the thief what food he had served the oxen early in the morning. The thief said, “Rice and vegetables.”

The physician asked the same question to the farmer. The farmer said, “I am poor hence, only the grass was served to the oxen.” Thereafter, the physician gave a purgative to the oxen to cause vomiting. The oxen discharged only grass from their rectum and vomited the same through the mouth. This was enough to support the claim of the farmer.

Then the physician said to the thief, “Do not steal anything in the future. It is not a good thing. It only leads a person to his fall.”

The thief promised not to do so in the future. The farmer was very happy to get his oxen back.