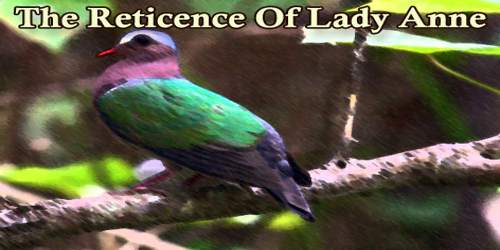 The Reticence Of Lady Anne

Egbert came into the large, dimly lit drawing-room with the air of a man who is not certain whether he is entering a dovecote or a bomb factory, and is prepared for either eventuality. The little domestic quarrel over the luncheon-table had not been fought to a definite finish, and the question was how far Lady Anne was in a mood to renew or forgo hostilities. Her pose in the arm-chair by the tea-table was rather elaborately rigid; in the gloom of a December afternoon, Egbert’s pince-nez did not materially help him to discern the expression of her face.

By way of breaking whatever ice might be floating on the surface, he made a remark about a dim religious light. He or Lady Anne were accustomed to make that remark between 4.30 and 6 on winter and late autumn evenings; it was a part of their married life. There was no recognized rejoinder to it, and Lady Anne made none.

Don Tarquinio lay astretch on the Persian rug, basking in the firelight with superb indifference to the possible ill-humor of Lady Anne. His pedigree was as flawlessly Persian as the rug, and his ruff was coming into the glory of its second winter. The page- boy, who had Renaissance tendencies, had christened him Don Tarquinio. Left to themselves, Egbert and Lady Anne would unfailingly have called him Fluff, but they were not obstinate.

Egbert poured himself out some tea. As the silence gave no sign of breaking on Lady Anne’s initiative, he braced himself for another Yermak effort.

“My remark at lunch had a purely academic application,” he announced; “you seem to put an unnecessarily personal significance into it.”

Lady Anne maintained her defensive barrier of silence. The bullfinch lazily filled in the interval with an air from Iphigenie en Tauride. Egbert recognized it immediately, because it was the only air the bullfinch whistled, and he had come to them with the reputation for whistling it.

Both Egbert and Lady Anne would have preferred something from The Yeomen of the Guard, which was their favorite opera. In matters artistic, they had a similarity of taste. They leaned towards the honest and explicit in art, a picture, for instance, that told its own story, with generous assistance from its title. A riderless warhorse with harness in obvious disarray, staggering into a courtyard full of pale swooning women, and marginally noted “Bad News,” suggested to their minds a distinct interpretation of some military catastrophe. They could see what it was meant to convey, and explain it to friends of duller intelligence.

The silence continued. As a rule Lady Anne’s displeasure became articulate and markedly voluble after four minutes of introductory muteness. Egbert seized the milk jug and poured some of its contents into Don Tarquinio’s saucer; as the saucer was already full to the brim an unsightly overflow was the result. Don Tarquinio looked on with a surprised interest that evanesced into elaborate unconsciousness when he was appealed to by Egbert to come and drink up some of the spilt matter. Don Tarquinio was prepared to play many roles in life, but a vacuum carpet-cleaner was not one of them.

“Don’t you think we’re being rather foolish?” said Egbert cheerfully.

If Lady Anne thought so she didn’t say so.

“I dare say the fault has been partly on my side,” continued Egbert, with evaporating cheerfulness. “After all, I’m only human, you know. You seem to forget that I’m only human.”

He insisted on the point, as if there had been unfounded suggestions that he was built on Satyr lines, with goat continuations where the human left off.

The bullfinch recommenced its air from Iphigenie en Tauride. Egbert began to feel depressed. Lady Anne was not drinking her tea. Perhaps she was feeling unwell. But when Lady Anne felt unwell she was not wont to be reticent on the subject. “No one knows what I suffer from indigestion” was one of her favorite statements, but the lack of knowledge can only have been caused by defective listening; the amount of information available on the subject would have supplied material for a monograph.

Egbert began to think he was being unreasonably dealt with; naturally, he began to make concessions.

“I dare say,” he observed, taking as central a position on the hearth-rug as Don Tarquinio could be persuaded to concede him, “I may have been to blame. I am willing if I can thereby restore things to a happier standpoint, to undertake to lead a better life.”

He wondered vaguely how it would be possible. Temptations came to him, in middle age, tentatively and without insistence, like a neglected butcher-boy who asks for a Christmas box in February for no more hopeful reason that than he didn’t get one in December. He had no more idea of succumbing to them than he had of purchasing the fish-knives and fur boas that ladies are impelled to sacrifice through the medium of advertisement columns during twelve months of the year. Still, there was something impressive in this unasked-for renunciation of possibly latent enormities.

“I shall go and dress for dinner,” he announced in a voice into which he intended some shade of sternness to creep.

At the door, final access of weakness impelled him to make a further appeal.

“Aren’t we being very silly?”

“A fool” was Don Tarquinio’s mental comment as the door closed on Egbert’s retreat. Then he lifted his velvet forepaws in the air and leapt lightly on to a bookshelf immediately under the bullfinch’s cage. It was the first time he had seemed to notice the bird’s existence, but he was carrying out a long-formed theory of action with the precision of mature deliberation. The bullfinch, who had fancied himself something of a despot, depressed himself of a sudden into a third of his normal displacement; then he fell to a helpless wing-beating and shrill cheeping. He had cost twenty-seven shillings without the cage, but Lady Anne made no sign of interfering. She had been dead for two hours.