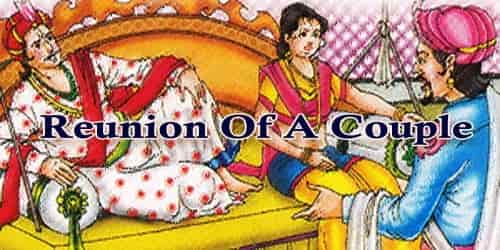 Reunion Of A Couple

Long ago, there was a king named Somvardhan who was ruling over Baji. He had a son named Rajyavardhan. Rajyavardhan and Meghnath, who was the son of the prime minister, were good friends. They both studied at Kashi for many years and had learned many things. The prince was an expert in entering the dead body of an animal, while Meghnath knew the art of bringing dead to life. After they finished their studies, they returned to Baji.

Then the king of Magadha approached Somvardhan with a marriage proposal of his daughter. Both agreed and the prince, Rajyavardhan married the princess of Magadha named Chandramukhi. She was very beautiful and adept in many subjects.

One day, the prince said to his friend, Meghnath, “Today I want to go hunting. Would you like to accompany me?”

His friend said, “Why not? When you are inviting me, I wouldn’t dare to deny. Let us go for hunting. It is our royal game.”

Both the friends went to the forest. There they saw a dead lion. Meghnath suggested to his friend that they should try their knowledge of the dead lion. The prince agreed and told Meghnath to make the dead lion alive. He decided to try his own skill after Meghnath.

Thus, Meghnath prepared himself to perform the task. He chanted the verse to make the lion alive. As soon as he finished his task, the lion stood alive. The prince was standing very close to the animal. The lion suddenly rushed to attack him. But a timely warning from Meghnath saved the prince. He had already told him to be active and ready to face the lion. The prince was ready. He swiftly took out his sword and killed the lion.

The prince was very happy with his friend. He said to Meghnath, “Dear friend, thank you very much. Your timely warning saved my life; otherwise, the lion would have killed me. You have won my heart. Now I will teach you the art of entering a dead body.” Meghnath said, “When also teach me your knowledge, I will also teach you the art of making the dead alive.” Both of them then taught each other their respective arts. Thereafter, they returned to the palace.

King Somvardhan had now become very old and often fell ill. One day, he died leaving the responsibility on the shoulders of his son Rajyavardhan. On the other hand, the prime minister had also become old and hence, took retirement from his work. His son Meghnath took the charge and became the prime minister of Rajyavardhan. Soon the royal comforts got into his head and he became a changed person. He wanted to remove the king and take his place himself. He even had his eyes on the queen Chandramukhi and wanted to marry her.

Thus Meghnath thought of a plan. He then said to the king, “It is long since we have gone for hunting. If you permit, we shall go for it today.”

The king Rajyavardhan readily agreed to his plan. Both the friends went to the forest on their horses. They found the dead body of a monkey. Meghnath thought, ‘This is a golden opportunity for me and I should not miss it. I would ask the king to enter the dead body of the monkey and thereafter, I would enter the body of the king. On getting the king’s body, I will kill the monkey, i.e. Rajyavardhan and thus, be a king forever.’

Meghnath requested the king, “We have been busy in the state affairs for long. Now we should test our knowledge, lest we forget it.” The king agreed and got ready to enter the body of the monkey. He said Meghnath, “I will enter the body of a monkey and you will keep a watch on my body.” So he went inside the body of the monkey. Meghnath was eagerly waiting for this opportunity. He quickly entered the body of Rajyavardhan. Seeing this, the king who was now a monkey said to Meghnath, “What are you doing? Leave my body immediately. I want to enter my body.”

Meghnath laughed and said, “You are a fool. Now I will sit on the throne. You must die now.” And he rushed to kill the monkey but the monkey quickly thought climbed up a high tree.

The monkey thought, ‘Oh! I have committed a blunder. I should not have taught him the art of entering another body. Now he will easily capture everything that belonged to me.’ Meghnath was also worried because he could not kill the monkey, who might disclose the secret in the future. He threw his own vacant body into a well and came back to the palace.

When he came back to the palace, nobody expressed any doubt about him. He thus became the king. He told everyone that Meghnath had been killed by a lion while hunting. His parents wept and cried and then accepted their son’s death as God wish.

Meghnath was now very worried about the monkey who might disclose the secret of his claim on the throne. He wanted to kill the monkey at any cost. He declared, “Monkeys are a nuisance. They damage the crops. So they should be finished. A monkey catcher would be paid two silver coins per monkey and a special price would be paid for the monkey speaking like human beings.”

The announcement created turmoil among the hunters. They started catching monkeys for the reward. The monkey having Rajyavardhan in his body was also caught by a hunter. The hunter thought of taking the monkey to the king the next day. He was not aware of the fact that the monkey he had caught could speak like a human being.

The monkey spoke to the hunter, “If you want a lot of money, you should take me to the queen.” The hunter was surprised to see the monkey speaking and said, “Who are you; A ghost or a genie?”

The monkey replied, “I am neither a ghost nor a genie, but a victim of a disloyal friend. I request you to take me to the queen. She will give you a lot of money.”

The greedy hunter said, “Alright! I will not give you to the king. But how can I approach the queen?”

The monkey asked him to bring a pen and a paper and said, “I will give you a letter and if you deliver it to the queen, you will get a lot of money. In case you do whatever you like.”

The hunter went outside and brought a pen and paper from another hunter. The monkey wrote a letter to the queen narrating the whole incident. He also asked the queen to give a good amount of money to the hunter to get him released from the custody.

Unluckily, when the hunter asked the other hunter for a pen and paper, the latter got suspicious. He was very clever and wanted to know what the matter was. He spied on the former hunter and heard the conversation between him and the monkey. He had already heard the announcement regarding a speaking monkey so he decided to buy the monkey from the hunter.

The next day, he bought the monkey from the first hunter at a very high price. But the first hunter did not tell about the letter and proceeded to the queen to get more money. On the other hand, the monkey was not worried about the new hunter and was satisfied that the letter would reach the queen as the first hunter had not revealed anything about his new owner. The first hunter gave the letter to the queen. The queen was very intelligent. She recognized the handwriting of her husband and understood everything. She gave a good reward to the hunter and decided to punish Meghnath who had entered the body of her husband. She asked one of her maids to bring a parrot and a goat from the market secretly. Her maid bought the parrot in a cage and a goat and gave them to the queen. Now she began thinking of a plan to release her husband.

On the other hand, the letter hunter along with the monkey left for the palace to get a reward. As the hunter reached near the palace, the monkey looked towards the window of the queen with hopeful eyes. The queen was standing with a parrot in her hands. She also saw the hunter along with the monkey, who was gazing at her. She understood the whole thing. She whistled sharply to the monkey. Then, she killed the parrot and started singing the instructions so that her husband (who was in the body of a monkey) can enter the body of the parrot. Her husband followed the signal and quickly left the body of the monkey and entered the parrots by using his skill. The queen put the parrot into the cage and brought him her room. The hunter was surprised to see the monkey dead. People assembled to see the dead animal.

When Meghnath came to know that Rajyavardhan had changed the body, he ordered to catch all birds and animals around the palace. Thereafter, he came to the queen and asked her, “Why don’t you love me wholeheartedly?” She replied, “I have noticed a change in your behavior and come to doubt that you are someone else, who resembles my husband.” Meghnath said, “Your doubt is baseless.” The queen said, “If you are right in your claim, just prove it by entering the body of this goat, which I am going to kill. If you could do it, I’ll be convinced, since my husband knew this art well.”

The queen then killed the goat and Meghnath got ready to enter the body of the dead animal.

The queen Chandramukhi got her husband back through her intelligence and Rajyavardhan received his old status. Then they killed the goat, i.e. Meghnath. The wicked Meghnath was no more. This way, the queen and the king were reunited.