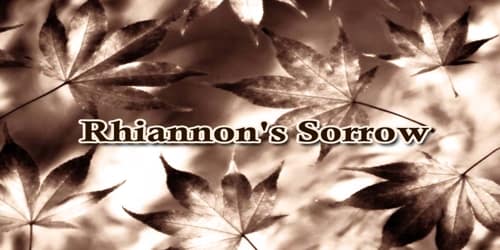 Long ago in Wales, there lived a prince named Pwyll who ruled the realm of Dyfed. Pwyll was a renowned warrior who lived in a high thatched hall guarded by wooden ramparts and surrounded by dense forest. In those forests, the people knew, beneath great mounds of earth, dwelled the fairy people.

Many feared the fairies, but Pwyll was not afraid. And when one night he met the beautiful Rhiannon, saw her dressed in shimmering gold and riding her white steed, he professed his love. She loved him in return, but she commanded him to wait for a year, to test their love.

One year after they had met deep in the forest, Pwyll returned to her. Because she so loved him, Rhiannon left behind her people and lived on earth as Pwyll’s bride and queen.

The people at Pwyll’s palace welcomed their new queen. Everyone knew she was of the fairy race, and those who had witnessed their meeting spoke of the strangeness of fairies, of the way they seemed to be but shadows unless they spoke and the way their songs washed away fear. Some wondered if a fairy could make their king happy, but she was lovely, adept at weaving, and when she sang, everyone stopped to listen, for they heard in her voice the echo of another world.

For the first few years, all went well, but when Rhiannon did not bear a child, people began to whisper, and some urged Pwyll to find another wife. Pwyll began to fret and mourn, but in the fourth year of their marriage, Rhiannon gave birth to a beautiful son, a child as far as his mother and as strong as his father. Everyone rejoiced, for now, Pwyll had an heir.

But one night soon after the boy’s birth, as Rhiannon slept in the women’s quarters with six waiting-women to stand guard over the child, something terrible happened. The women fell asleep, unable to keep their eyes open as if they had been enchanted. When they awoke, they discovered the cradle was empty and their mistress lay asleep as if under a spell.

The women were terrified of punishment, and so they decided to accuse Rhiannon of murdering her own child. They killed a deer and covered their queen with blood. When she awoke and reached for her infant, the women dragged her to Pwyll and his councilors. “Your wife has killed your child. That is the way of fairy women.”

At this news, Pwyll grew weak with despair. “Please, beloved lady, lift the enchantment,” he pleaded with his wife, but Rhiannon wept at his feet. “My husband, I left my magic behind me when I came to you, but I swear I am innocent. I do not know what has happened to our child.”

The councilors, though, declared Rhiannon guilty and they commanded her to be punished by custom.

And so Rhiannon, distraught by all that had gone wrong, stood outside the palace gates from that day on. She wore a heavy horse collar, and she had to stop all passers-by and tell them of her crime. Those who wanted to could climb upon her back as if she were a horse and Rhiannon had to carry them to the king.

The punishment was to last for seven years. Day after day, Rhiannon withstood the shame and pain without complaint. She knew she had no one to defend her, and though her grief was great, she refused to show weakness.

And then one day, in the middle of the fourth year, three strangers appeared on horseback. One was a handsome man, the second a stately woman and the third a golden-haired boy. As they approached, Rhiannon began to tell them of her crime, but the man held up his hand and stopped her. And the boy reached out, holding a piece of brocaded cloth.

Rhiannon gasped when she saw the cloth. “I wove that,” she whispered, and when she looked into the child’s eyes, she knew this was her son.

“What can this mean?” Rhiannon asked, and Teirnyon, for that was the man’s name, told his tale.

“Four years ago, I was in my fortress in Gwent with my mare as she went into labor. She dropped her foal, but just at that moment, she trembled, and an enormous clawed hand reached through the window and grabbed the foal by its mane. I drew my sword and severed the arm. And that’s when I heard a great howl. I ran outside to chase the demon, but as I ran in the darkness, a golden-haired infant wrapped in fine brocade dropped at my feet. My wife and I have raised him as our own, but when we heard rumors of your story, of the theft of your child, we knew this was your son. The fairies tried to steal him away, but we have brought him home.”

Teirnyon and his wife, Rhiannon and her son, ran into the palace to tell Pwyll the tale, but the moment the king saw the child, he knew this was his boy. He wept and embraced his wife, and on his knees, he begged her forgiveness.

Afterward, they lived in happiness, and the people understood that the world of enchantment and the world of humans were fluid, that beings traveled among each other and sometimes tragedy came of this, but there was also goodness and grace. After all, Teirnyon’s generosity put an end to the sadness of the palace of Pwyll and in many, many hearts.