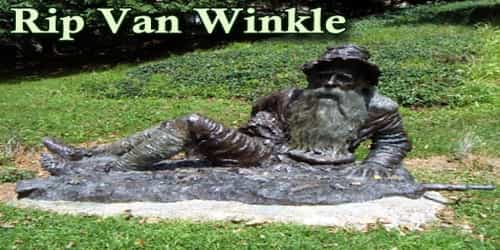 Rip Van Winkle was a lazy boy. He was so lazy that he slept the whole day. His mother tried her best to get Rip Van Winkle to take up a job. When he did get a job, he was asked to leave because he slept too much.

One day, Rip Van Winkle, tired of his mother insisting on him getting a job, ran up a mountain with his favorite companion, his dog, and his gun. He reached the top, crossed a stream, went to a spot where nobody ever came and sat down panting. He had never had so much exercise all his life.

He was just getting back his breath when he heard someone call his name. “Strange, nobody ever comes here and surely no one that I know,” thought Rip Van Winkle. He turned to see a funny-looking man carrying a big barrel. The funny-looking man said, “Please help me carry this barrel to my mates a little below the stream.”

Rip Van Winkle had climbed so far up the mountain to avoid work. Here was a man asking for help. He first decided to refuse but then thought, “Let’s help the poor chap, then I can come and rest.” So, he and the funny-looking man walked down to a cave in the mountain, below the stream.

There Rip Van Winkle saw many other funny looking men; all of them were playing the game of ninepins. They ignored him. As soon as the barrel was placed in the ground, the men pulled out mugs, dipped it into the barrel and drank. It was wine.

Rip Van Winkle too dipped a mug in the barrel and drank the wine. It tasted good. He thought he should have one more mug, then another and another, until he found the room swinging in front of him. Rip Van Winkle went to sleep.

When he awoke, he saw that all the funny looking men had gone. He called out to his dog but there was no response. He could not believe he had slept the whole day and night. He got up, his joints ached. He picked up his gun. Instead of the clean well-oiled piece, he found the barrel rusted and the lock falling off. He threw it away.

As he started trudging back home, he saw the village down below, which seemed somehow changed. When he entered the village he saw new faces; all of them looked at him and rubbed their chins. Seeing them do this, Rip Van Winkle did the same. To his astonishment, he found he had grown a foot-long beard overnight.

Rip Van Winkle was puzzled; he believed that he knew most of the village folks well but there did not seem to be anyone he knew around. This was the same village, where he could see the mountains and the streams. The children made fun of him, running behind him, pulling his beard.

Rip Van Winkle stopped by a place where there had been a school and asked the crowd that had gathered, “Where is Schooner, the schoolmaster?” Somebody said, “Oh! Schooner, he went to war in sixty-three and never came back.” “And Van Dammel?” asked Rip Van Winkle. “He died eighteen years back,” said another voice in the crowd. Rip Van Winkle thought he was going mad. “Had he slept all these years on the mountain?”

Finally, Rip Van Winkle asked, “Does anyone here remember Rip Van Winkle?” A very old woman said, “Yes, he was my lazy son. He went up the mountains twenty-one years back but never returned. His dog came back without him.”

Rip Van Winkle was overjoyed. He said, “Mother, it is me, Rip Van Winkle. Don’t you recognize me?” “Oh! My son. It is really you. Where have you been all this while?” Mother and son hugged each other.