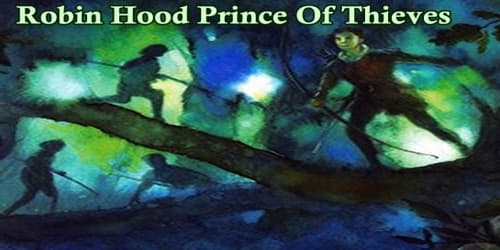 Long ago, in England in Sherwood Forest lives Robin Hood. As a boy, Robin had been cheated by a few noblemen and since then he had decided that he would not spare the rich. He would rob the rich and give to the poor.

The Sheriff of Nottingham had placed many rewards for the capture of Robin Hood but nobody had ever caught him. Robin Hood had a number of men who served him; they had made him their leader. They acted as informers; they would warn Robin Hood whenever the Sheriff had any new plan to catch him.

The rich were scared of going through Sherwood Forest because they knew Robin Hood would attack. The pressure mounted on the Sheriff of Nottingham to capture Robin Hood. He went to take the help of the king. The king refused to send any of his men to help in the capture of Robin Hood.

Finally, the Sheriff thought of a plan. “Let us have a competition to choose the best shooter in Nottingham. Robin Hood cannot resist such a competition. He will surely come, when he does, my guards will capture him,” he told his noblemen. All of them agreed.

Now, Robin Hood was an excellent shooter; there was none better than him with a bow and arrow in the whole of Nottingham. And Robin Hood could surely not resist taking part in any competition to prove that he was the best.

Robin Hood’s loyal men dissuaded him. “Robin, this competition is being held to trap you,” said one of the men. “It would be foolish to talk into the lion’s den,” said another. But Robin Hood was not willing to listen.

So, the next day all the arrangements for the competition were made. The crowds were all seated and ten contestants were there. The Sheriff turned to one of the guards and asked in a whisper, “Has Robin come?” “No, Your Highness, Robin has red hair. None of the contestants have red hair.” The Sheriff said, “He must be scared.”

The competition began. William, the Sheriff’s man, who had also participated and man in a green outfit were vying for the first prize, a golden arrow, after ten rounds. It was time for the last arrow to be shot; the winner of this round would be declared the best shooter in Nottingham.

William took aim first and shot; it was very close to the center. The Sheriff applauded. “Good shot, William,” he said. Then it was the turn of the man in green; he let go of his arrow. The crowd cheered hysterically. It went through William’s arrow and bull’s eye. And within a flash, the man in green let go of two more arrows that came flying towards the chair on which the Sheriff sat and stuck on either side of it. The Sheriff was stunned.

The man in green was none other than Robin Hood. Before the Sheriff recovered, he pulled off his black wig, threw it in the ground, jumped over a wall on to his waiting horse and was gone. “Get him, you fools. That is Robin Hood,” shouted the helpless Sheriff, but it was too late. Robin Hood had escaped again.