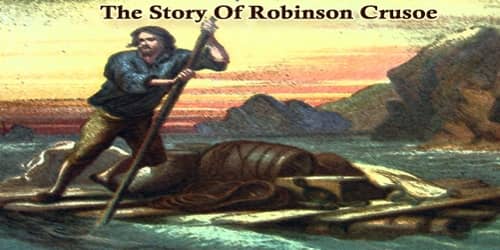 The Story Of Robinson Crusoe

Robinson Crusoe as a young man loved to sail to distant lands. His father did not approve of Robinson as a sailor but let Robinson make his own decisions.

Robinson Crusoe wanted to become a sailor. He went on his first voyage at the age of nineteen. It was a disastrous journey; there was a heavy storm and the ship was wrecked. Robinson survived but did not go home. He went to Brazil. There he became a farmer.

In time, Robinson Crusoe made a lot of money in Brazil. This he re-invested in other businesses.

One day Robinson Crusoe had to go to Africa on business. On the way, there was another storm like the one on his first journey. This time the storm was more fierce; his ship was wrecked and Robinson Crusoe was washed to a lonely, uninhabited island.

Robinson Crusoe explored the island for any sign of human life; there was none. With great difficulty, Robinson built a home. His expertise in farming helped; he started growing rice and barley. For meat, he hunted the wild goats. Robinson Crusoe tamed a few of these goats for milk, from which he learned to make butter and cheese.

Twenty-six years passed in this lonely way for Robinson Crusoe. He craved for the company. One day, he saw footprints on the beach; instead of being happy, Robinson was scared having been alone all these years. Robinson had made sharp weapons, which he now carried around for self-defense. He also had a gun that he had preserved and kept since the time he was shipwrecked.

For many days Robinson Crusoe saw nobody, but one evening he saw about a dozen men. They were eating other humans. They were cannibals from a nearby island. The cannibals left the island after a few days.

Robinson Crusoe felt safe but he knew the cannibals would come back. One morning Robinson saw the wreck of a ship. He ran to it and saw that it was a Spanish ship and in it was a survivor a middle-aged man.

Robinson Crusoe took the man to his hut, gave him some food and water. Once the man recovered his health, he helped Robinson Crusoe with his work Robinson called the man Friday as he had been rescued on a Friday.

Friday did not know English but as time went by he learned a few words, enough for basic communication. One morning, Robinson Crusoe found Friday missing; he suspected that the cannibals were back and had captured him.

He went in search of Friday and found him just before the cannibals were about to kill him. He rushed into their midst firing at all the cannibals and killing them. Friday was safe.

Robinson Crusoe and Friday found the boat of the cannibals. They decided to sail back to Brazil, where Robinson had left his business. They carried enough food and water and set sail to Brazil. Robinson Crusoe had spent thirty-five years in the island.