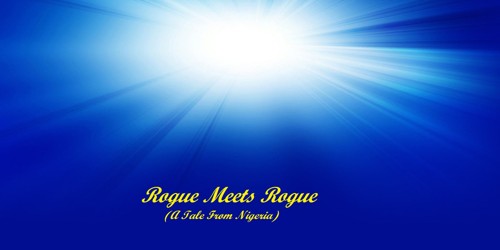 Once upon a time, a rogue who lived in Kano wanted to make his fortune, but he owned little and had no special skills. And so he peeled the bark from the branch of a tree. This he dyed blue, and then he beat it until it was smooth as silk. He wrapped this in a bundle and set off for the market.

On his way, he came upon a rogue from Katsina who was seeking his fortune as well.

“Oh, this is my money,” answered the rogue from Katsina. In fact, his sack was filled with stones, but on the top, he had placed coins. “And you, friend, what do you carry there?”

“This!” replied the rogue from Kano. “This is the finest blue broadcloth. It’s worth a fortune in the market.”

After a little more conversation, the men agreed to exchange their goods. Each one thought he had tricked the other. They smiled and waved farewell, and each set off for his home.

When they were some distance apart, each stopped to examine his goods. When they realized that they had been tricked, they ran back toward each other.

“So we are both clever fellows,” the rogue from Kano said. “We would do well to join forces and seek our fortune together.” The rogue from Katsina agreed.

Together they walked to the market. There they bought some staff and begging bowls. Pretending to be blind beggars, they walked to a camp of traders who were just settling down for the night.

“May we stay with you tonight?” they asked. “We are poor and tired.”

The traders welcomed them.

As soon as the traders were fast asleep, the two rogues stole all their goods and moved these to the bottom of a dry well nearby. Then they returned to the camp and fell fast asleep.

At dawn, the traders discovered they had been robbed. The two rogues woke and cried, “And the thieves have stolen our water bottles!”

The traders were distraught. Without a thought for the two beggars, they packed up their camp and set off to chase the thieves. When they were gone, the rogues hurried to the well.

When they had been working for a long time, the man from Katsina called, “The next load will be heavy, but after that, you have only me to haul up.” With that, he crawled into a crate and hid inside.

The man from Kano laughed to himself as he hauled up the last crate and carried it to his pile of goods. He had no intention of hauling up the man from Katsina. Instead, he put a load upon his head and started to run away.

The rogue from Katsina crept out of his crate, and when the man from Kano saw him, he began to laugh. “You are a clever fellow,” he said. “No wonder we’re such wonderful rogues.”

And so they collected their goods and set off. When they arrived in Kano, the man from Katsina said: “I must visit my family. I will leave my things here with you and return in a month. Then we shall divide our goods.”

Well, the man from Katsina had not been gone long when the man from Kano figured out how to trick his old partner. He dug a deep grave behind his home and this he covered with calabashes to enable him to breathe.

When the month was nearly through, he climbed down into the grave and his family heaped dirt over the calabashes.

The next day the man from Katsina returned. “Haven’t you heard?” the family said. “Our beloved father and husband died yesterday.”

“Oh my,” said the man from Katsina. “Please take me to his grave.”

When he saw the grave, the man from Katsina said: “You ought to cover this grave with thorns. If you do not, the hyenas will come and dig up the poor soul. Oh, my poor beloved friend.”

“We’ll do it tomorrow,” the family said. Then they took the man from Katsina to his resting place for the night.

At midnight, the rogue from Katsina sneaked out of the house and went to the grave. He began to growl like a hyena, all the while scratching at the dirt above the grave.

When the rogue from Kano heard the growls, he shrieked and climbed quickly out of the grave.

“All right,” the rogue from Katsina said, “we have each played fine tricks.”

The two rogues divided the goods. And from that day on, they gave up trickery, for they had learned that one rogue will always attract another.